Eddie Pepperell held the 54-hole lead at the Betfred British Masters, but although he had a special item of clothing on, he couldn't win his second title at the event. 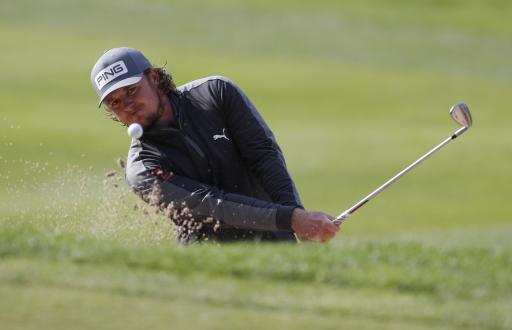 Eddie Pepperell is one of the most honest and outspoken players on the European Tour and golf fans often enjoy his presence on social media as well.

The Englishman led the Betfred British Masters after three rounds on 10-under-par and it looked as though he could pick up his second win at the event in the space of three years.

But the World No. 210 failed to build on his lead on Saturday at The Belfry, shooting 1-over-par and finishing in a tie for 11th place.

In true Pepperell style, he didn't let the disappointment of his performance in the final round affect his mood and he took to Twitter to share a joke with his fans.

Wore my lucky Jack Nicklaus socks today... frankly, he would’ve puked if he saw some of my shots. Thanks to @Betfred for sponsoring the @british_masters again . At least I got some free wine out of today . Much needed week off for me now then onto Denmark. pic.twitter.com/5Cj5vzLmAO

The two-time European Tour winner had his lucky Jack Nicklaus socks on during his final round, but they did not bring him the luck he wanted and Pepperell joked that the golf legend would not have enjoyed watching him on Saturday.

"Good to see Eddie up there - most straightforward and talented ordinary bloke out there - a win soon ... maybe Mount Juliet," one fan said.

"Was rootin for you today. Maybe next time? Is there any reason why you wouldn't drink up to and during play? Worked for Hurricane Higgins?" one fan commented.

"Well played Eddie. You are closer to silverware. Not long to go. Upwards and onwards. Enjoy your week," another fan commented.

"Honest from you, enjoy the wine. There is sometimes something more important than golf. Cheers," another fan said.

"Clearly the message from today is never give up, and follow your dreams," one fan said.

Although Pepperell didn't quite produce the magic that the Golden Bear always used to, it was great to see him back near the top of the leaderboard on the European Tour.