Jamie Donaldson has OLD SCHOOL Callaway club in his bag from 2002! 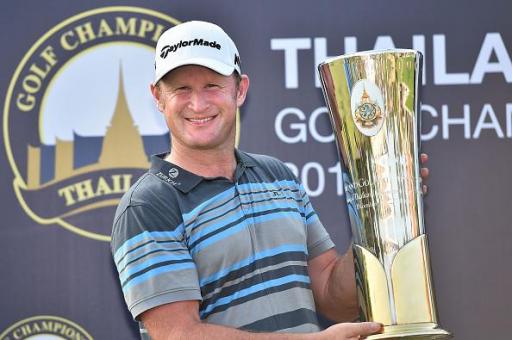 Three-time European Tour winner and Ryder Cup hero Jamie Donaldson has something interesting in his bag at the Italian Open.

Donaldson is using a Callaway Big Bertha Steelhead 3 5-wood from 2002.

One user on social media commented the putter looked like it had been fished out of a lake as it looks so battered.

RELATED: WHO IS BRYSON DECHAMBEAU'S GIRLFRIEND?

The Scot famously missed the 2016 season when he cut his hand in a chainsaw accident.

So folks in my time off decided to have a fight with a chainsaw and lost! Oops!! C u in Dubai pic.twitter.com/uyVFfnsULL

He has struggled for form in recent years and is currently ranked 86th in the Race to Dubai.

He is likely to miss the cut after he finished his secound round at 2-over-par.

Henrik Stenson and Finland's Kalle Samooja are tied for the lied at 9-under after they both shot stellar rounds of 64.

Donaldson holed the winning putt that secured the 2014 Ryder Cup at Gleneagles after stiffing it to a few feet.

He beat Keegan Bradley in the singles and has famously gone on to recreate the shot.

Jamie Donaldson hits this approach to win the Ryder Cup at Gleneagles.#momentsofthedecade pic.twitter.com/VPeGq7hYzA