Bryson DeChambeau has been subjected to chants of 'Brooksy' for a number of months on the PGA Tour. 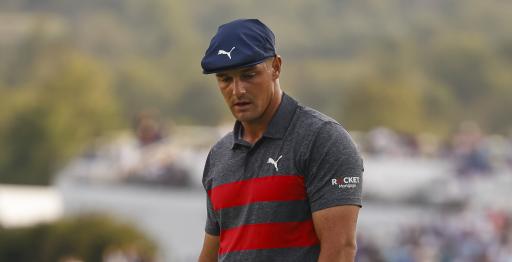 After speculation emerged of fans being ejected from future PGA Tour events for shouting 'Brooksy' at Bryson DeChambeau, the comments have not stopped on social media.

During DeChambeau's feud with Brooks Koepka which has rumbled on for a number of months, he has received shouts of 'Brooksy' at multiple PGA Tour events.

At times he has reacted to the spectators and on other occasions, he hasn't. Now there is talk of spectators being ejected for shouting this at future events, as well as other disrespectful comments.

"Fans who breach our code of conduct are subject to expulsion from the tournament and loss of their credential or ticket," said PGA Tour commissioner Jay Monahan before the first round of the Tour Championship.

"The barometer that we are all using is the word 'respect,' and to me, when you hear 'Brooksy' yelled or you hear any expression yelled, the question is, is that respectful or disrespectful?

"That has been going on for an extended period of time. To me, at this point, it's disrespectful, and that's the kind of behaviour and we're not going to tolerate going forward."

As you can see from the Instagram post above, it would seem that the 'Brooksy' comments have now transferred from on the course to the social media comments sections.

The speculation has received mixed responses from different figures in the sport, such as Lee Westwood and Shane Lowry who posted their comments on social media.

Despite hearing jeers and distasteful comments in 2021, DeChambeau has managed to put himself into a great position to win his first FedEx Cup at the Tour Championship this week.

The 27-year-old entered the week at East Lake Golf Club on 7-under-par in third position on the FedEx Cup standings, three shots behind Patrick Cantlay.

On Thursday, DeChambeay shot a 69 to move on to 8-under-par for the week, but he is now five shots behind Cantlay who moved on to 13-under-par after a first-round 67.