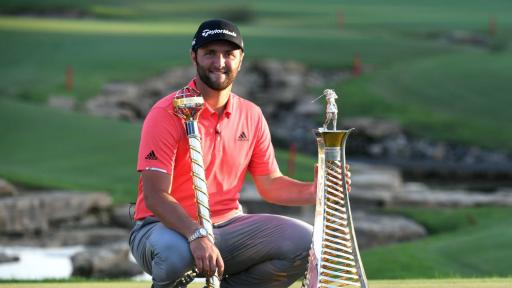 Jon Rahm has been crowned as 2019 Hilton European Tour Golfer of the Year.

Rahm, 25, landed three title on the European Tour in 2019 including the Irish Open, Open de Espana and season-ending DP World Tour Championship, a win that secured his first ever Race to Dubai title.

The World No.3 follows in the footsteps of Seve Ballesteros and Sergio Garcia as the third Spanish winner of the European Tour Golfer of the Year.

“It is a huge honour for me to be named the Hilton European Tour Golfer of the Year,” Rahm told The European Tour.

“To emulate another of Seve’s achievements in winning this award is very humbling, and I’m so proud of what I have achieved this year.

Some of the best moments from my 2019 @EuropeanTour season....I'm extremely proud to have won the #RacetoDubai and can't wait to try and defend it next year! #ETGolferOfTheYear pic.twitter.com/TTcb3VTHWP

“To win both the Dubai Duty Free Irish Open and DP World Tour Championship for a second time, as well as defend the Open de España, were all incredible moments.

“But to finish the year as winner of the Race to Dubai is something I’m incredibly proud of achieving at this early stage in my career.”

Rahm will bid to land his fourth victory of 2019 in his final event of the year at this week's Hero World Challenge in the Bahamas, presented by Tiger Woods.

Keith Pelley, Chief Executive Officer of the European Tour, said: “The 2019 European Tour season had so many stand-out moments, not least the dramatic finale at the DP World Tour Championship, Dubai when Jon earned his place in European Tour history, joining the legendary Seve Ballesteros as the only other Spaniard to become Europe’s Number One player.

“For Jon to win the Race to Dubai in the manner that he did, with so much pressure on that final hole, simply underlines what an incredible competitor he is. However, this award also recognises the hugely impressive standard of his performances across the year and it demonstrates the strength we have on the European Tour that there were a number of worthy contenders for this award, including Shane Lowry who narrowly missed out despite winning The Open and a Rolex Series event.

“Jon has a wonderful future ahead of him and he is undoubtedly a deserving winner of the 2019 Hilton European Tour Golfer of the Year award.”