Rahm wins it all in Dubai to complete incredible 2019 season. 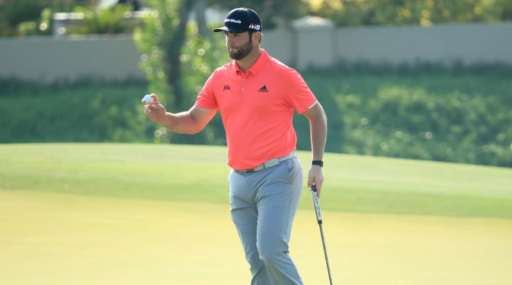 Rahm, 25, prevailed by one stroke over Tommy Fleetwood and Mike Lorenzo-Vera after making a stunning up-and-down for birdie from the greenside bunker on the par-5 18th.

Rahm, who arrived at the eighth Rolex Series event of the season as one of five players who could be crowned Europe's No.1, carded a final-round 4-under 68 to finish on 19-under par.

Rahm had led by six shots after seven holes but Fleetwood birdied three of his last four in a 65 to set the target at 18-under par and as Rahm stood on the 18th tee, the whole season was heading to a playoff.

The big-hitting Spaniard hit a perfect drive up the last but found the sand with his second before putting a sublime bunker shot to four feet and rolling home for a birdie and his first career Harry Vardon Trophy.

Lorenzo-Vera, playing alongside Rahm in the final group, carded a final-round 70 to finish in solo third on 17-under par.

Rory McIlroy started the final day two strokes off the pace but he could not get anything going and struggled to a final-round 73 to finish solo fourth on 12-under par.

Danny Willett was back in fifth on 11-under par.

Rahm takes home not just the $3 million world record first prize but a $2 million bonus for topping the Race to Dubai Rankings Presented by Rolex, with Fleetwood, Bernd Wiesberger - who led the Rankings coming into the week - Shane Lowry and Mathew Fitzpatrick also taking home bonuses for finishing in the top five.

NEXT PAGE: How much every player won at the DP World Tour Championship