Martin Kaymer CHIPS IN at 18 as golf fan GIVES IT LARGE in front of the camera!

Kaymer chips in for birdie at 18, much to the delight of one of his fans at the Mallorca Golf Open 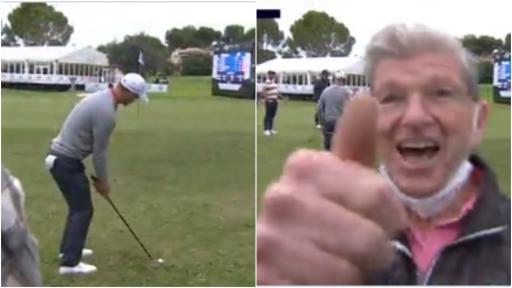 Martin Kaymer hit one of the shots of the week so far at the Mallorca Golf Open when chipping in for birdie on the 18th hole - and it was also met with one of the more comical moments of the season.

Kaymer sent his approach shot way right of the green at the par-4 18th hole.

With little green to work with and playing off a "smelly lie" according to on-course commentator Warren Humpreys, the two-time major champion at least had the benefit of chipping back into the wind.

Kaymer stepped in and played a beautiful shot up onto the green and it trundled down into the back of the cup.

Much to the delight of one of his fans.

Come for the shot, stay for the man sticking his face into the camera!

That's how to finish your round! @MKaymer59 enters the weekend after hitting back to back 68s.#MallorcaGolfOpen pic.twitter.com/pVMJHo631k

Kaymer finished with back-to-back birdies to card a second consecutive round of 68, moving him to 4-under par and in contention for his 12th European Tour title.

The 36-year-old German is bidding to win his first tournament since the 2014 US Open.

South Africa's Bryce Easton finds himself out in front on 11-under par as he goes in search of his maiden European Tour title.

Play was suspended due to darkness and Easton will return on Saturday morning to complete his final hole of round two.

The home challenge is likely to come from Alvaro Quiros, Jorge Campillo and Sebastien Garcia Rodriquez who all find themselves four shots back in a tie for second on 7-under par.

England's Laurie Canter is once again up there heading into the weekend at 6-under par.

NEXT PAGE: BRYSON ACHIEVES 213MPH BALL SPEED IN THE BAHAMAS!