The Mallorca Golf Open was suspended in round two due to fading light, but Richard Mansell shot up the leaderboard on Friday. 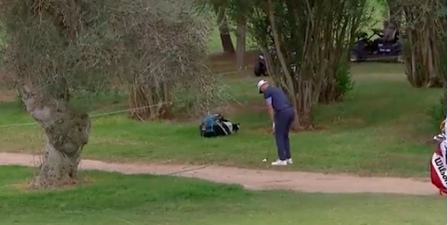 Richard Mansell hit one of the shots of the year during the second round of the Mallorca Golf Open, on his way to carding the low score of the day.

Mansell was eight shots adrift from the overnight leader Jeff Winther at the beginning of Friday, but he got to work early on with two birdies on his opening two holes.

The Englishman added four birdies in his final nine holes to card a bogey-free 6-under-par 64, but the highlight of his round came on the par-3 15th hole.

His tee shot had missed the green by some way, but his chip was superb. He hit a low shot which cleared a path, went under the branches of a tree and bounced around a bunker.

The ball perfectly rolled across the green and into the hole. Mansell was delighted that his shot was caught on camera as he celebrated with his caddie.

The World No. 352 sits on 6-under-par, five shots behind the leader Bryce Easton who has one more hole of his second round to complete on Saturday morning.

The South African surged up the leaderboard with five birdies and just one bogey at Golf Santa Ponsa. He currently leads by four ahead of Winther, Alvaro Quiros, Sebastian Garcia Rodriguez and Jorge Campillo.

Impressive Englishman Laurie Canter, who was disappointed not to grab his first European Tour win at Valderrama last week, remained in the hunt on day two with a 4-under-par 66.

Two-time major champion Martin Kaymer produced a magical moment of his own in round two of the Mallorca Golf Open.

The German had missed the 18th green with his approach shot but he managed to hole a superb chip to card his second 68 of the tournament.

It may not have been as impressive as Mansell's heroics, but Kaymer sits on 4-under-par and is seven shots back with 36 holes remaining.