Will a Green Jacket fit over the GUNS? Bryson DeChambeau: "They'll tailor it" 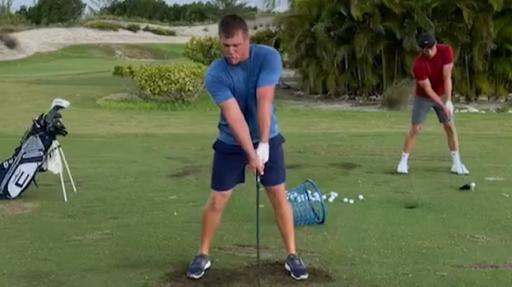 Bryson DeChambeau fielded questions about long driving, Brooks Koepka and The Masters during an epic speed session yesterday where he crashed the 213mph mark for ball speed.

DeChambeau was smashing balls on the range at Albany in the Bahamas during his off-season break alongside his good friend, former baseball star and long drive specialist Bobby Bradley, who is also the founder of Royalty Sports that GolfMagic checked out earlier this season.

Bradley runs the popular Long Drivers Instagram account, and it was there that he conducted a Live Q&A with the man he calls "DECHAMBINO".

DeChambeau sent more than 300 rockets down the range with his Cobra RADSPEED proto driver while using range balls... and even his mis-hits were still at 210mph ball speed.

Bryson was carrying the ball more than 380 yards just about every single drive during the video.

Some were even flying out the back of the range and close to the houses!

One of the funniest reponses to a question was when DeChambeau was asked how he will "fit a Green Jacket over those guns?"

DeChambeau replied: "They'll tailor it. Six months to The Masters, we've got to get ready and prepared."

He also reckons he will hit it 40 yards further than Brooks Koepka off the tee when the duo clash in Match 5 next month.

DeChambeau also addressed his best tips on how to achieve more speed and loading the shaft more efficiently.

Bradley also posted a hilarious introduction for Bryson as he walked down the stairs.

NEXT PAGE: BRYSON KEEPS HITTING BOMBS IN THE BAHAMAS - THIS IS UNBELIEVABLE!