Australian hits the front after a second-round 68, but Ryder Cup legends Tommy Fleetwood and Henrik Stenson are firmly in the mix. 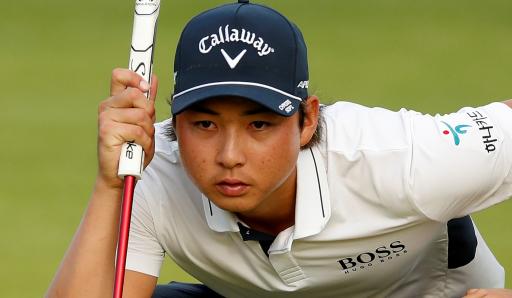 Min Woo Lee heads into the weekend at the DS Automobiles Italian Open with a two-shot lead after following up his opening round of 64 with a 68 on day two in Rome.

The 23-year-old Australian, who claimed his second European Tour title and maiden Rolex Series victory in Scotland earlier this season, began the day in a three way tie at the top of the leaderboard but carded four birdies and a single bogey on Friday to get to 10-under par and establish his first 36 hole lead on the European Tour.

FEATURE: WHAT CAN WE LEARN FROM JON RAHM'S APPROACH TO THE GAME?

No putter needed for @Minwoo27Lee

Major champion Henrik Stenson and home-favourite Edoardo Molinari were then among the large group another shot further back.

Due to the threat of thunderstorms in the Italian capital on Saturday afternoon, round three of the DS Automobiles Italian Open will be a two-tee start U-draw, beginning at 07:30 local time.

"Didn’t make too many mistakes, made a couple of bad swings but the ball, it was going really far, and I didn’t really change the way I played, I just hit everything so long. Very solid, hit a couple nice putts coming down the stretch and happy to be in the lead with two rounds to go.

"The pin is in a little funky spot on the top (17 green) and if you land it up top you are probably going to go over the back.

"So going back to hitting it long, we were trying to hit a seven iron on the bottom of the hill and I’ve just nuked this thing, and as soon as I hit it I said 'sit down', and it landed pretty much perfect, and at the time we thought it lipped out as well, so there was the cheeky grin because it ended up stopping.

"First step will be to keep the umbrella in the bag. I’m not sure how it will play wet but I’m looking forward to the challenge."

NEXT PAGE: BEST GOLF BALL DEALS OF THE WEEK - ALL FOR UNDER £25