The Ryder Cup captain met and spoke with members of the media to talk about his 24-year association with Wilson and his career. 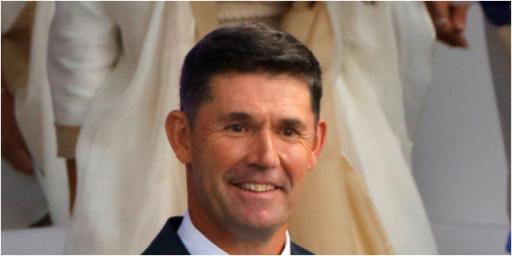 Padraig Harrington has admitted he would have happily settled for a brief stint as a journeyman pro before embracing a quiet life.

Harrington met and spoke with a few members of the media yesterday at a virtual press conference.

The European Ryder Cup captain was speaking about his 24-year association with Wilson.

Harrington, 50, even named his dog after the brand and he was candid in assessing his own career.

It was the fear of "losing it" that motivated the Irishman to work so hard and he never looked back.

The three-time major winner has enjoyed a sparkling career that also included six victories on the PGA Tour.

That's not to mention the 15 titles he won on the European Tour.

MORE: JUSTIN THOMAS ON THE DIFFERENCES BETWEEN FEEL & REAL

Topics included the first time he picked up a Wilson club and how he would trade one of his Open wins to claim the Masters.

Asked if he expected to achieve everything he has in his glittering career, Harrington said: "It certainly wasn't part of my thinking.

"When I turned pro I would've settled happily to be a journeyman pro.

"Remember this is back in the 90s, people retired from golf in their early 30s in the 90s.

"So I would have been happy to be on the tour for five years, come off the tour and got myself a very good, say, prestigious club pro job, resort job.

"Obviously I achieved more than I ever thought, I became comfortable very quickly and progressed."

Up-and-down to guarantee you make the cut...

Harrington said he was motivated by the trepidation of "losing it" after he first emerged on Tour.

"I always had a fear of losing it for a number of a long number of years so, y'know, I was very motivated for at least 12 to 14 years because I was always afraid it would go away," he added.

"I think part of this, if you knew the outcome, it would be boring in some ways.

"I think the fear helped in that I didn't know what was around the corner and gave the motivation."

Harrington had a number of big near misses in his career, but he added: "I wouldn't change anything, everything was a learning experience.

"I had two great chances at the Masters but not clean cut ones.

He added: "I lost a ball leading the Open in 2015. Imagine losing a ball in a major tournament?

"Everyone watching on the TV knew where the ball was and I was looking in the wrong place but nobody told me, which still rankles with me a bit.

"But anyway, there has been others. There were plenty of opportunities and chances over the years, I wouldn't give up what I've got."

Asked if he would give trade one win, Harrington said: "I think every pro would say the Masters.

"I think the reward for winning the Masters lasts forever, the players get to go back for years and years.

"You're in the same size club as every other major winner, but it seems to be the one players get the most out of winning.

"I would give up one of my Opens to win one of the two other majors.

"Yes, the Masters tends to be the one but they are all great."

NEWS: THE EASIEST PLAYER TO ROOT FOR ON THE PGA TOUR

NEXT PAGE: TIGER WOODS NICE IS ENGAGED TO MLB PLAYER