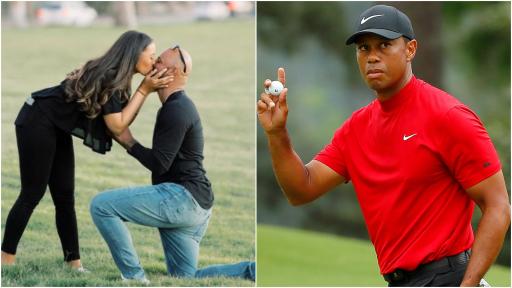 Cheyenne, 31, took to her Instagram page to post an image of her kissing Hicks, 32, while he was down on one knee, with the caption: "YESSS to forever with my best friend and my [love heart] 10.21.21."

Social media sensation Paige Spiranac, who has more Instagram followers than any other golfer including Tiger Woods, posted: "Congratulations! So happy for you both!"

Hicks replied to the photo: "You will forever have my [love heart]."

LPGA Tour stars Jessica Korda, Michelle Wie and Paula Creamer were others to post their congratulations.

RELATED: PAIGE SPIRANAC SAYS SHE WILL NOT STOP POSTING CLEAVAGE PICS ON INSTAGRAM

Congratulations to Aaron Hicks and Cheyenne Woods on their engagement! pic.twitter.com/0LZizc7mdO

Cheyenne was born in Phoenix, Arizona, and is the daughter of Susan and Earl Woods Jr, who is Tiger Woods' half-brother, which makes her Tiger's half-niece.

Her paternal grandfather Earl Woods, Tiger's father, was her first golf coach and her inspiration for the game.

Cheyenne turned professional in 2012 and qualified for the US Women's Open that year when finishing co-medalist at her qualifying tournament.

Her first professional win came on the SunCoast Ladies Series in the summer of 2012.

Cheyenne then became a member of the Ladies European Tour in 2013, finishing 78th on the Order of Merit, before she picked up her second career win in 2014 at the Volvik RACV Ladies Masters - her first on a major tour.

RELATED: TIGER WOODS IS BACK ON THE GOLF COURSE WITH HIS SON - IS THE COMEBACK ON?

She then finished tied 11th in the LPGA Final Qualifying Tournament to earn Category 12 Membership to the circuit, but she went on to make only eight cuts in her first season.

Cheyenne earned her playing rights through qualifying again for 2016, but unfortunately things did not quite materialise how she would have wished and she currently only receives limited playing rights and invites for tournaments.

In 2020, Cheyenne played in just six tournaments on the LPGA Tour, making the cut in just one of them.

She did, however, land an incredible 16-shot victory on the lower-tier Cactus Tour at the start of the year, just to remind everyone how good she really is at this sport.

Let's hope Cheyenne can make a run back out on the LPGA Tour at a similar time Tiger hopefully returns to the sport.

Her husband-to-be Hicks also loves his golf and plays to a very high level. In fact he was even spotted making an incredible hole-in-one on a par-4 hole at Silverleaf Country Club back in January this year.

WATCH HICKS MAKE A SENSATIONAL HOLE-IN-ONE ON A PAR-4 HOLE!