Perhaps we will see Brooks Koepka dressed like Scottie Pippen for Halloween... 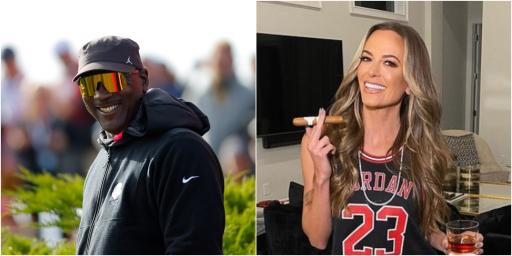 Halloween is not even here yet but Brooks Koepka's fiancée Jena Sims decided to do her best Michael Jordan impression.

Unfortunately we haven't seen images of Koepka dressed up yet but hopefully one will emerge dressed like Bryson DeChambeau.

Sims, a 32-year-old actress and model, got fully into the spirit of the things by going all out on her outfit paying tribute to the NBA legend.

It wasn't enough for her to wear the classic Chicaco Bulls uniform with the number 23 complete with those classic Air Jordans.

MORE: WHO IS JENA SIMS?

Sims even walked around the party with a cigar and a glass of whiskey on the rocks to complete the ensemble.

If Koepka does decide to dress up this weekend and pictures do emerge perhaps we could see him as Scottie Pippen.

Jordan is a huge golf fan and has attended every single Ryder Cup since the Battle of Brookline in 1999.

He puffed on cigars and joked with the United States team as they dismantled Padraig Harrington's European side 19-9.

Jordan is known to gamble for huge sums of money on the golf course and says he plays every single day.

Sims captured the image on Instagram: "There is no “i” in team, but there is in win. - Michael Jordan".

NEWS: WHAT ARE THE BEST IRONS FOR BEGINNERS?

NEXT PAGE: TIGER WOODS FIANCE IS ENGAGED TO MLB STAR