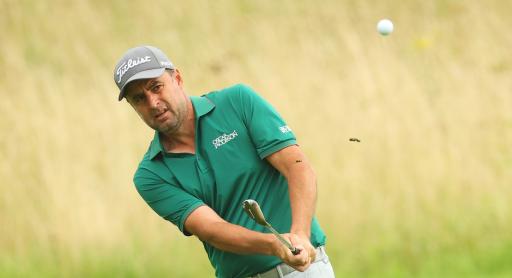 Richard Bland returned to European Tour action for the first time in over three weeks and picked up from where he left off as the Englishman took the first round lead in the Cazoo Classic at London Golf Club.

Having earned an emotional first European Tour victory in May's Betfred British Masters, which came in his 478th start and at the age of 48, Bland has been riding a wave of positivity since, claiming top fives at the Made in HimmerLand presented by FREJA and the Dubai Duty Free Irish Open.

His last appearance came at the The Open in Royal St George's, where he hit the first tee shot of the Championship on Thursday morning, so the Southampton native returned to Kent this week brimming with optimism.

A 7-under 65 continued his momentum on home soil as he earned a one-stroke lead over English compatriots Dale Whitnell and Jordan Smith, as well as American duo Sihwan Kim and Sean Crocker.

"Pretty much all of it was good today, I just felt like it was a continuation from where I left off before my break," said Bland.

"I was driving the ball great, hitting some nice iron shots in and I didn’t really hole that much to be honest.

"To be fair I probably had three or four that looked like they were going to in and touched the edge but didn’t go in. I felt like that score was the worst it was going to be which is very nice feeling after three weeks away.

"To start any tournament with three straight birdies – I hit a lovely nine iron into ten, had a nice putt downhill, a lovely soft cut five iron into about five feet at 11 and two good shots on 12, left the chip hanging over the edge – it was almost a case of it was too easy.

"But I just kept going, go through the same swing thoughts that I’m doing and it’s nice to look up at the ball and it’s going the direction you expect it to be going."

Bernd Wiesberger, who is chasing a big run of results in the next four weeks as he targets a late push into the qualification places for Pádraig Harrington's European Ryder Cup team, opened with a four under par 68 to share ninth position.