When you are out of luck, the game of golf can throw up some very cruel scenarios and we saw one of these at the London Golf Club yesterday. 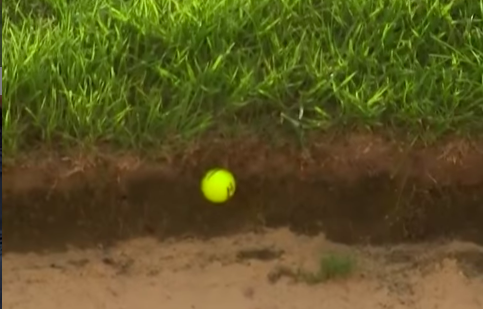 The European Tour has returned to the London Golf Club this week for the Cazoo Classic and it has been an exciting week so far at the Kent venue.

However, it was not all sunshine and rainbows for Ben Evans, who found himself with a devilish lie in a bunker which makes you contemplate how his ball ended there in the first place.

The Englishman found himself in a fairway bunker with his first shot on the par-4 4th hole, he was 7-under-par at this point and only three shots behind the leaders on 10-under-par.

Unfortunately, Evans hit his shot straight into the face of the bunker and his ball was embedded into the ground, overhanging the trap.

The World No. 987 was granted a free drop by the rules official and he dropped his ball in the rough just above the bunker. He went on to make a bogey, which put him a further shot back of the leaders.

It is fair to say that this is one of the most unlucky scenarios that we have seen on the European Tour, as you would expect Evans' ball to just drop back into the trap.

Evans did not hit the shot that he wanted as he thinned his ball into the lip of the bunker, but the outcome was unlucky and it led to a bogey.

He finished his day with a 1-over-par 73, meaning that he began the final round today in Kent eight shots behind 54-hole leader Rasmus Hojgaard, who is looking for his third win on the European Tour.