Robert MacIntyre pipped fellow TaylorMade players to the Rookie of the Year award. 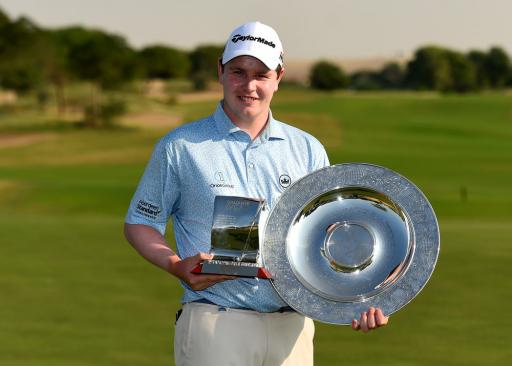 Robert MacIntyre was awarded the European Tour's Sir Henry Cotton Rookie of the Year Award after closing out his season with a final round three-under 69 at the DP World Tour Championship and finished the season with a combined score to par of 160-under, best of any player this season.

The 23-year-old from Oban, Scotland, emerged on top of an impressive group of rookies by finishing 11th on the yearlong Race to Dubai Rankings. Macintyre pipped fellow Team TaylorMade Athletes Kurt Kitayama and Guido Migliozzi who finished second and third respectively in the rankings.

In total, MacIntyre had an impressive seven top 10s on the European Tour this season, and made 25 cuts in 30 tournaments, all adding up to his 11th place finish in the Race to Dubai.
As well as being awarded the Sir Henry Cotton Rookie of the Year award, MacIntyre also received the Challenge Tour Graduate of the Year and played every week there was an event he was exempt for right up until the Kenya Open in March, won by fellow TaylorMade athlete Migliozzi.
The Scot had back-to-back second places at the Betfred British Masters and Made in Denmark presented by FREJA, while he also finished in sixth place at the Open Championship at Royal Portrush.
This time last year, MacIntyre was ranked 300th in the world and he has now climbed as high as world No.66.