Sky Sports Golf presenter: "Thomas Pieters is a World No.1 in waiting" 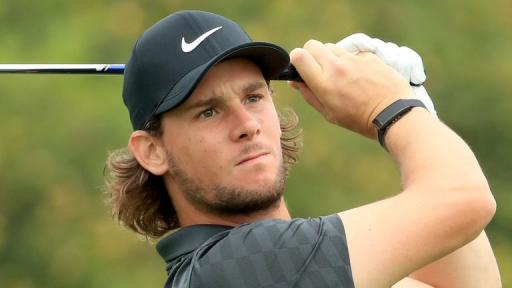 Sky Sports Golf presenter Robert Lee believes Thomas Pieters has what it takes to become World No.1 after the big-hitting Belgian landed a fifth European Tour title at the Portugal Masters on Sunday.

Pieters, 29, carded a final-round 68 to see out a two-shot victory on 19-under par at Dom Pedro, vaulting him from 126th to 74th in the Official World Golf Rankings.

Lee, a two-time European Tour himself, is now adamant we will see the very best from the man who tallied the top combined points on debut at the 2016 Ryder Cup (four wins from five).

"Thomas Pieters is a World No.1 in waiting," Lee told the Sky Sports podcast.

"He is so good. When you look at his game, he putts well, he pitches and chips it well, and he hits it unbelievably well.

"He does everything well. He's so strong in every department, but there must be a disconnect because he is so good. He has won five times - which is hard to do - and five wins is great, but he's so much better than that.

"There has to be a disconnect somewhere and there must be a fundamental reason why he's not pushing towards the world's top 10 players.

"Once you're in the top 10 and you're established there then you can start looking a little bit further north, and there's no reason why he can't do that.

"He's only 29 and I do believe that he has the best years ahead of him. There should be nothing holding Pieters back."

CLICK HERE TO LISTEN TO THE SKY SPORTS GOLF PODCAST

The most important shot of the day?

The win also sees Pieters move from 70th to 29th in the European Tour's Race to Dubai standings heading into the final two weeks of the season.

Pieters raced out the blocks on the European Tour in 2015 with two wins in the space of three weeks in Czech Republic and Holland, before adding a hat-trick of wins a year later in Denmark.

But then he went a full three years without a win before stopping the rot with a second career win at the Czech Masters in August 2019.

Pieters then ended more than a two-year winless spell following a two-shot victory in Portugal on Sunday.