Thomas Pieters was seething after a three-putt from 30 feet at the 16th. 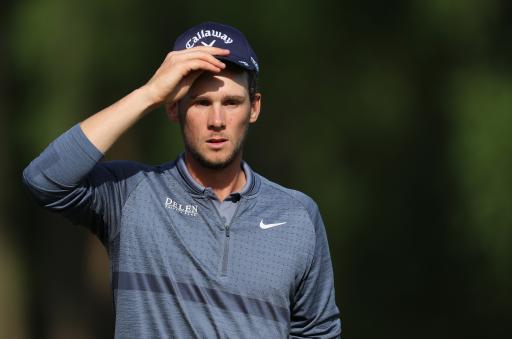 Thomas Pieters' frustration got the better of him on day one of the Mallorca Golf Open, but thankfully his caddie Adam Marrow stepped in before things reached boiling point.

Pieters found the front edge of the green at the par-4 16th in two shots, leaving himself with just over 30 feet for birdie.

But the Belgian left his putt some seven feet shy.

Clearly frustrated at his weak birdie attempt, Pieters tried to drill his par putt into the hole but unfortunately it was pushed to the right.

Cue a thumbs up, Tyrrell Hatton-style, as he strode towards the hole to tap in for bogey.

Pieters then muttered to himself at having made his first bogey of the day but that is where his caddie Marrow stepped right in to stop him in his tracks.

Despite his caddie saying "now don't get angry", Pieters plucked his ball out the cup and launched it straight into the lake.

Me too Mr Pieters, me too buddy. pic.twitter.com/mgLk4exYje

The "don't get angry" comment certainly made those in the Sky Sports Golf commentary box laugh.

Richard Boxall said: "If my caddie said 'don't get angry' to me... can you imagine?!"

For those unaware, Pieters has typically had something of a temper out on the European Tour over the years, frequently snapping clubs over his knee.

He even hurled his broken club into a bush at The Open once.

Pieters only made one bogey all day at the 16th and his tee-to-green game was on song for much of the day.

It was therefore no doubt frustrating for Pieters to finish just 2-under par for the round.

Nevertheless, it still leaves him in a solid enough position to attack over the final three rounds.

Andrew 'Beef' Johnston started well with a flawless round of 66, but Denmark's Jeff Winther leads the way after a round of 8-under 62.

WATCH PIETERS SNAP A CLUB OVER HIS KNEE AND SEND IT STRAIGHT INTO A BUSH!