Bushnell boss on US PGA: "Golf lasers will be used on tour for years to come"

Bushnell Managing Director Andrew Grose believes that the use of distance measuring devices on the PGA Tour will become common over the next few years. 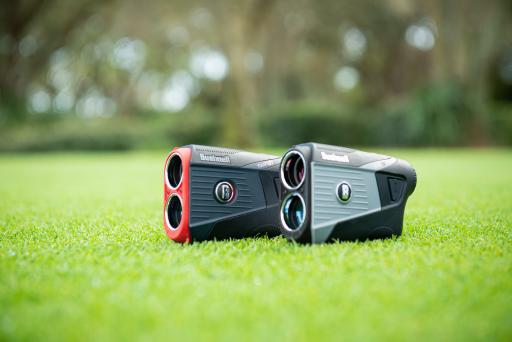 Earlier this year it was announced that devices, such as the ones that Bushnell produce, will be allowed at the PGA Championship later this month.

This marked a significant point in the history of distance device use in golf and Grose believes that this could be a point at which devices will be allowed at further events.

"Undoubtedly, it is the way forward," Grose said, speaking to GolfMagic.

"We have seen it develop from not being allowed at all, subject to local rule and now it's not even under local rule anymore. It can be used automatically everywhere unless the tournament organisers specifically state otherwise.

"My feeling is that it will be allowed and accepted across tournaments in years to come. No doubt about it."

In 2006, the use of these devices was permitted but only under local rules established by clubs and committees. Then in 2019, they were fully permitted without a local rule exemption.

Players can use the devices to measure the distance between two points and record past club yardages, but they cannot be used to measure elevation changes or study weather conditions at the course.

According to their website, 99% of PGA Tour professionals use a Bushnell device, which is an incredible number and Grose believes that the PGA Championship will be a landmark for the use of distance measuring devices.

"It's definitely a landmark that a top-level professional tournament has allowed distance measuring devices to be used," he added.

"It is a landmark and Bushnell has been at the forefront, no doubt about it. It is a company that has made distance measuring devices for many years for sports outside of golf too, it is a momentous occasion."

Devices are also set to be allowed at the Senior PGA Championship and Women’s PGA Championship, so it is clear that golf's authorities are gradually relaxing the restrictions of their use.

Players and caddies have been known to use devices during practice rounds, so the yardages and notes that golf fans see them consulting will have been through the use of devices such as Bushnell's products.

Although it could benefit the players' score, Grose believes that both the caddie and player have everything dialled in prior to the tournament beginning.

"They've walked the fairways and courses extensively with their caddies. It will only have an effect if somebody was wild off the tee and found themselves in a difficult position.

"If you're behind a tree or in the car park, the caddy probably hasn't got a measurement over there, or if you've got Bryson DeChambeau who suddenly wants to go over the water."

Collin Morikawa will be looking to defend his US PGA crown at Kiawah Island, when the tournament gets underway on May 20th.

NEXT PAGE: OUR FAVOURITE TAYLORMADE PUTTERS OF RECENT TIMES