Could Jordan Spieth’s return from the wilderness be the key for Rory McIlroy?

"Simplicity is perhaps key to seeing McIlroy bouncing down the fairways again as we once did when he burst onto the scene." 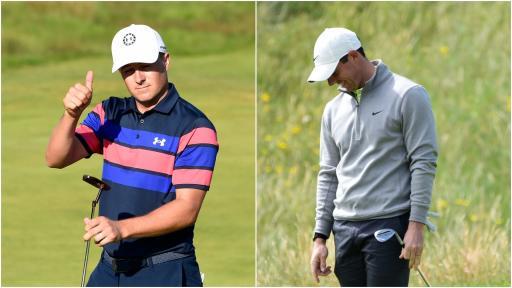 Jordan Spieth paused and said: "Let me think about that question for a second."

It’s not often a major athlete is stumped by a query from a sports journalist, especially one so simple as to what lesson Spieth would teach his younger self.

More often than not, our ball striking heroes repeat an answer they’ve said a thousand times before and leave the mixed zone like they’ve been trained to do. Manufactured.

But Spieth was perplexed. And his answer was so simple it could be the key to Rory McIlroy finally breaking the drought that has seen him without a major since the 2014 Open.

McIlroy appeared down in the doldrums before the Olympics, suggesting he had mixed feelings about going and even admitted he was only there for the good of the game.

But he later said he had never tried so hard to try and finish third as he dropped out of a seven-man play-off for the bronze medal at the Kasumigaseki Country Club in Japan.

He has already confirmed he will be back in three years’ time as Xander Schauffele - nerveless in his gold medal win - attempts to defend his title.

And so, it is another case of so near yet so far for the Northern Irishman.

But let’s return to Spieth, who said: "The one thing about golf that I wished I knew then that I know now.

"Honestly I wished I played with the mentality I had back then.

"You overthink the game the more you're out and you just want to play like you're a kid and just free wheel it and have fun.

"So, I'd tell myself to just keep my head down and focus on why you love the game.

"So, just try and keep your head down and have fun, play as much golf as you can, play with friends, just enjoy that competition the way that I grew up loving it."

Spieth’s words may sound like it’s a simple answer to a very difficult problem for McIlroy, now 32 years old with a few grey hairs reminding him the clock is ticking.

McIlroy will want to focus on swing changes, lower the ball flight of his wedges, control the accuracy of his driving, focus on his physical and mental wellbeing and gain strokes off the tee.

He will try and get that perfect balance between golf and spending time with his daughter Poppy.

But herein lies the problem for McIlroy.

There is, really, no perfect balance.

Tiger Woods prioritised his education over golf growing up, and latterly the game when he turned professional.

Now the big cat makes sure his kids come first and he gets in shape for the tournaments he is able to play and he leaves nothing in the tank. His focus is unwavering.

Even those around McIlroy seem to be trying to point him in the direction of simplicity.

His caddie and closest confidante Harry Diamond helped McIlroy avoid disaster at the Wells Fargo on the final hole by convincing his boss to keep it simple and take a penalty drop.

It earned him a first win since November 2019.

His coach Pete Cowen also made an interesting observation before this year’s Masters, where McIlroy was ranked his lowest in more than a decade.

Practice to improve, he said, but stop looking back at what we used to be like.

Those are words we should all take on board.

There is no doubt McIlroy is absolutely the most over-analysed golfer on the planet, although Bryson DeChambeau looks like he will soon take over the mantle.

It’s natural for those who love the sport to dig deep into his faults as we mere mortals overthink every element of the swing.

How often do we smash a drive down the middle of the fairway on 18 and hit a green in reg and drain a putt for birdie after duffing our way round the first 17 holes?

Those who are trying to work out McIlroy may suggest nothing is wrong and it’s just a matter of time, that he is well past his best, that Tour pros are just so much better or see a psychologist.

But simplicity is perhaps key to seeing McIlroy bouncing down the fairways again as we once did when he burst onto the scene.

Find it and hit it.

His boss Cowen is reported to have told him there is no future in the past.

"So you’ve got to look forward."