Brooks or Barstool - who is your money on?! 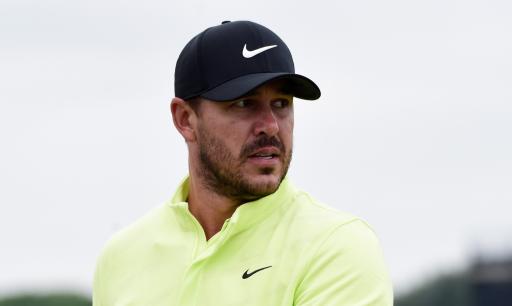 Brooks Koepka has confirmed he will be playing left-handed against Barstool Sports founder Dave Portnoy in a $250,000 charity match on Tuesday September 7.

Koepka, who has been enjoying some down time off the course with his partner Jena Sims since finishing tied sixth at The Open last month, took to Twitter to announce the news, captioning his post with 'Champ vs Chump'.

Portnoy is said to play off an 18 handicap.

The four-time major champion and Portnoy decided to take to the fairways for charity next month following some harmless banter between the pair after The Masters in April.

Koepka, who will be playing the match left-handed to give Portnoy some sort of chance in the match, is competing for his charity foundation.

Portnoy has confirmed he will be playing for the Barstool Fund.

Koepka is expected to have Pardon My Take hosts Big Cat and PFT Commenter on his bag for the match, while Portnoy, no doubt contemplating the idea of having Bryson DeChambeau on his bag, has decided to bring in Frankie Borelli (member of the Fore Play podcast) as his caddie.

Barstool Sports is a digital media company that produces content focused on sports and pop-culture, and it was founded by Portnoy in 2003.

You might think Portnoy would have a significant advantage against Koepka's weaker left-handed swing, but you would be wrong.

Last year, a left-handed Koepka was seen crunching an 8-iron 194 yards with his ball speed sitting just under 130mph. It was a little off the target line, but the swing and outcome was still very impressive.

NEXT PAGE: BRYSON SAYS A RYDER CUP PAIRING WITH BROOKS WOULD BE "FUNNY"