Is this the MOST excited we've been about a Tiger Woods return for a long time?

The big cat was seen in public walking without crutches for the first time since his horror crash...so naturally the golf world is excited. 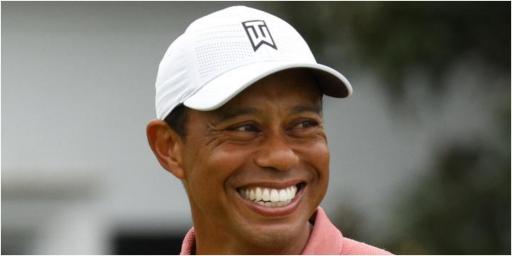 I never forgave Tiger Woods when his serial philandering made the front pages across the world simply because it was not my place to forgive him.

Woods is not a politician and he does not trade off his squeaky clean image to try and obtain votes to increase power.

UPDATE: NEW VIDEO EMERGES OF TIGER WOODS WALKING FREELY WITHOUT A LIMP ON THE GOLF COURSE!

He's a sports star and no doubt there are many professional athletes who have skeletons in their closet they'd rather not be revealed to the world.

There is absolutely nothing left for Woods to prove to anyone and we'll always have the red jumper Sunday memories and fist-pumps even if he never makes it back.

Well I guess hello world, a young cat once said and I cannot even begin to imagine the dark day an old cat finally announces his retirement.

But until then I will cherish Woods because like every other amateur golfer of my generation he is the reason why I first picked up a club in the first place.

This angle of Tiger Woods’ famous chip in the 2005 Masters is unreal pic.twitter.com/oryawn1KRV

So when images began to circulate of Woods standing behind his son at the weekend in Florida without the need for crutches I began to dream.

Like countless other fans, I begun to question whether or not it was really possible to see Woods play again.

It's only a few months until the Masters, right? He should be good to go. I want to see some Augusta artistry again from the main man.

Post Ryder Cup we are experiencing a bit of a lull in golf interest. In the UK our evenings are drawing in and our interest in the game can fade a bit.

Hang this @TigerWoods beauty in his Augusta Collection.

A master class in trajectory and skill with a 7-iron from 184 yards out. The Milled Grind sole in his #P7TW irons helps him hit his windows from all kinds of lies. #Reliving81 pic.twitter.com/oy5WJtiRdv

Which is why we need Woods on our screens. We yearn for it and his absence has left a huge void and anyone who says the contrary is kidding themselves.

The bland banter between Bryson DeChambeau and Brooks Koepka is almost as tedious as Sir Nick Faldo grappling with the concept of DeChambeau drinking lots of protein shakes.

When Tiger returned last time we saw a smile instead of a frown. That image of Woods chasing a putt into the hole when grouped with Kevin Na at TPC Sawgrass will live long in my memory.

Tiger and Kevin Na had the moment of the week so far at the 17th pic.twitter.com/SGb6zvZz4B

It was just one image and we cannot even see Woods' face and yet somehow this is probably the most exciting golf image in months. He's even got that classic Tiger pose standing with his hand on his left hip. Come on, let me dream.

There has been no official word as to the status of his recovery. He was recently asked by Golf Digest's Daniel Rapaport about where he is in his recovery and he declined to go into details.

Sources close to Woods have suggested he has said the words: "Man, it can't end like this."

And so does the golf world.

RELATED: BEST GOLF TIPS FOR HOW TO WARM UP CORRECTLY