Three golfing scenarios and the rule changes that are now applicable, according to PGA rules expert Ashley Weller. 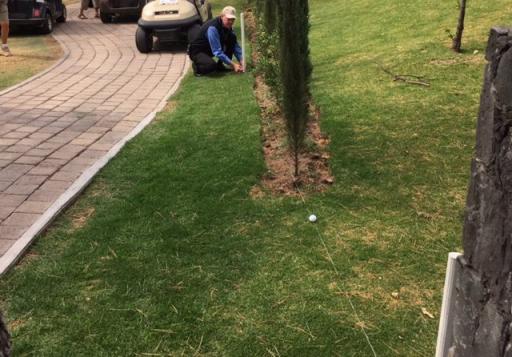 In continuation of looking at how the Rules were changed in the overhaul effective from 1 January 2019, I would like to take a look at Rule 8 – Course Played as It Is Found, specifically 8.1 – Player’s Actions That Improve Conditions Affecting the Stroke, writes Lead Tournament Director of the PGA Europro Tour, Ashley Weller.

Let’s take three scenarios and compare what penalty, if any, was applicable under the old Rules and examine any changes under the new Rules...

Player A finds himself in bounds, but an out of bounds stake is interfering with bis backswing. He removes the stake but before he plays a stroke his playing partner correctly advises him that he was not allowed to move the stake.

> Old Rules – The player is penalised with the General Penalty (2 strokes in stroke play, loss of hole in match play) for improving the area of his intended swing. He cannot avoid the penalty, even if he replaces the stake in its original position prior to making his next stroke.

> New Rules – Again, the player receives the General Penalty under Rule 8.1 as he has improved conditions affecting his next stroke. However, under Rule 8.1c he can now avoid the penalty by restoring the conditions he improved in breach of the Rule. Therefore, if he replaces the stake in its original position before playing his next stroke he will have avoided any penalty.

RELATED: DID YOU KNOW ABOUT THIS NEW RULE INVOLVING PROVISIONAL BALLS?

The following day, Player B finds herself in the trees with her backswing restricted by a small branch. She improves the path of her intended backswing by bending the branch back and hooking it around another branch, causing the moved branch to snap. Again, her playing partner comes to her rescue to inform her she was acting contrary to the Rules. She cannot get the branch to return to its original position as she’d spoken to Player A and understood the new Rule and was trying to avoid being penalised. Her playing partner once again rescues her by producing a role of tape which she uses to tape the branch back into its original position.

> Old Rules – As in Scenario 1, the player receives the General Penalty.

> New Rules – Whilst the player has restored the conditions improved in breach of Rule 8.1, the player is not allowed to use other materials to repair the broken branch (Rule 8.1c(1)) and therefore still receives the General Penalty.

RELATED: DID YOU KNOW ABOUT GOLF'S NEW RELAXED RULES ON THE PUTTING GREENS?

Player A is back on the links again, engaged in a fearsome tussle with Player C in the Club Championship Medal. Player C blocks his tee shot on the final hole and finds himself just in bounds but with and out of bounds stake just in front of his ball, interfering with the path of his proposed follow through. He pulls out the stake and tosses it to one carelessly, causing it to tumble down a steep bank and into a large clump of stinging nettles. Player A, ever the sportsman, informs Player C that he cannot remove the stake but following his recent experience he knows that if he replaces the stake he will avoid getting a 2 stroke penalty. Player C realises he cannot retrieve the stake he removed but fortunately for him there is another stake 15 yards behind where his ball came to rest and he is able to quickly fetch it and place it in exactly the same spot as the original. Both players agree the original conditions affecting the stroke have been restored and they resume the titanic battle.

> Old Rules – As previously, Player C received the General Penalty as soon as he removed the original stake.

> New Rule – Even though Player C restored the conditions affecting the stroke he would only avoid penalty if he had retrieved the original stake and replaced it, as Rule 8.1c(1) states that he is not allowed to use a different or additional object to restore the conditions.