Tiger Woods' caddie Joe LaCava was speaking ahead of the 46-year-old's induction into the Hall of Fame. 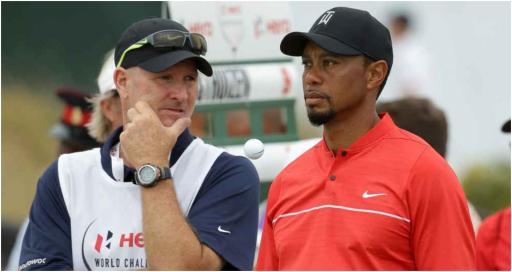 When Tiger Woods won the 2019 Masters he turned to his caddie Joe LaCava and emphatically told him: "We did it".

The use of "we" was important for Woods, 46, who was recently inducted into the World Golf Hall of Fame at PGA Tour headquarters.

One thing that struck me was how Woods focused on the sacrifices of others that have delivered him success during his acceptance speech.

Woods' carrier LaCava - who was in the audience - knows all too well just how difficult it has been for the great man to return to the top of the game.

He was with him at base camp when he started the climb from his back fusion surgery before the last comeback.

Now he believes his friend will climb the mountain. One more time. He recently spoke to SiriusXM PGA Tour Radio about this all.

What did LaCava say?

"He takes it one day at a time, but he's certainly hoping to get back.  He loves to do this more than anything, like all the guys. And same thing I tell people, listen, I said, 'How many times can this guy work his butt off?'

"So I think he's willing to give it one more hard go on, you know, the work that he's gotta put into it."

He added: "I think it's gonna be even more work than it was coming back from the fusion surgery with the back and stuff like that, but I think he's willing, at this age, to do it.

"And, like you said, maybe that father-son tournament gave him a little more motivation because, as most people saw if they watched it he hasn’t lost much in the golf.

"He may not be quite as long as he once was but he can still hit the ball and still can putt and chip. So, I mean, if he can get around a golf course, he could still be dangerous, if that happens."

LaCava, 67, was speaking before Woods' induction.

He said: "I realize that I’m a tail-end guy, but I also feel like I'm a part of his career, so I'm psyched that he asked me and my wife to come down and be a part of it. That's the kind of person he is. Just the greatest player to ever play the game getting inducted tonight."