PGA Tour caddie Simon Keelan, who carries for Seamus Power, pulled off an almost impossible shot at TPC Sawgrass's 17th at The Players. 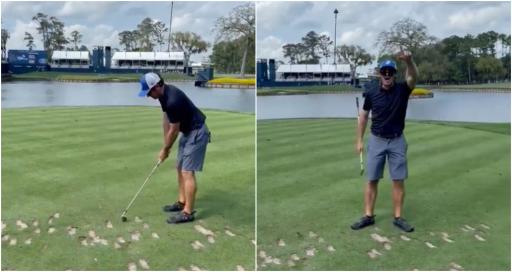 When it comes to tee shots on the PGA Tour the 17th at TPC Sawgrass can even make the steely players weak at the knees.

Just ask Brooks Koepka, who memorably said that it was the scariest shot in golf. He also said the drop zone was the next scariest.

At only 140 or so yards, the shot in theory doesn't seem to present too many difficulties. Just a smooth wedge. A gentle 9-iron. Nudge an 8?

Early 2022 Players leader Harold Varner III had got himself to 7-under par by the time he reached the 17th in his first round.

By the time he had left, he was three shots worse off. A catastrophic triple bogey six. He was the first player of the day to find the water.

He made bogey at 18, and signed for an opening 69 and found himself considerably off the lead and became the chaser.

Brutally honest in his assessment, he told the media afterwards: "I was s******* my pants."

"When I got up there because the angle was just so bad. I wasn't sure," he added of his drop zone shot.

"I got up there, and it was just a little funky, but I was more scared that it might go in the water again.

"When it was coming down, I was like, not another one.

"But it doesn't kill me when I play bad or good. I love just the opportunity to play as well as I can.

Perhaps Varner III and the rest of the field could take some inspiration from Seamus Power's caddie Simon Keelan.

He turned the club (Tyrrell Hatton's 8-iron) upside down and took aim. Shane Lowry was recording.

With one smooth swing, he found the green. He duly took in the applause from the crowd.

We should say though, that Keelan is a former professional at Monkstown Golf Club in County Cork. But still, what a shot!

Had a day for myself. The Open champ recording me, Tyrell’s 8 iron turned around and Seamie dying to see a splash! #17 @THEPLAYERSChamp #caddiecomp @CaddieNetwork pic.twitter.com/fwkZRxbSiw