There is an uncomfortable silence surrounding the 15-time major champion... 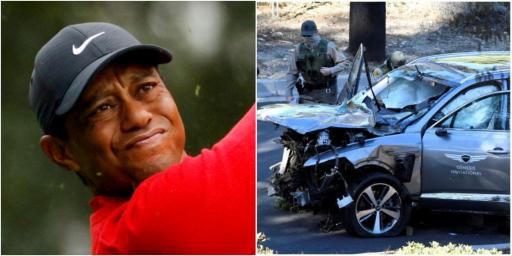 When Tiger Woods made a septuple-bogey at the 2020 Masters he used his sand wedge as a walking stick to get out of the bunker.

At Golden Bell, Woods looked momentarily beaten by Augusta National as he gingerly reached into the cup to retrieve his ball.

A beaten man. An old man. There wasn't anything left. Until it wasn't. Woods composed himself and got straight back on the horse.

Your next shot is more important than breathing Woods has said he tells his son Charlie about the attitude he needs to adopt on the course.

Woods later solemnly admitted, "you're so alone out there" when talking about that uncharacteristic moment at the 12th hole.

How alone he must have felt these last nine months. Three weeks in hospital. Then three months in a hospital bed.

"Crutching around" Woods described it as he slowly made it outside to try feel the sun on his skin.

Even to this day, Woods suggests he still feels pain in his back and leg, which at one point amputation was discussed.

But Woods has always been about the fight and the desire.

He had the desire to not be beaten at the 2020 Masters even when he had absolutely nothing to gain and nobody to prove wrong.

After he made a 10 at the devilish par-3, the highest score he's ever made on a hole, Woods showed us why he is a champion.

This is the kind of attitude that we know Woods will adopt when he focuses on his latest comeback.

Woods admitted this week that he does not have the desire to try and have a full-time schedule.

He alluded to getting that "last major" and suggested he is targeting possibly making an appearance at the 150th Open next year.

Then he wants to pick and choose a few events a year, just like Ben Hogan did.

I do not believe for one second that Woods is done in this game and I will die on that hill.

If Woods is swinging a club like this and he is "halfway" there in his recovery then he is capable of another major.

As Woods has suggested before, he has climbed this mountain many, many times.

So far as a full practice schedule is concerned, he doesn't have the desire to do that anymore.

For as long as he is physically able to swing a club, I'll believe that Woods will want to battle. To go out on his sword.

Woods is an incredible ambassador for the game there is no denying.

But there is an uncomfortable silence surrounding Woods at the moment.

An elephant in the room.

What put him in that hospital in the first place?

All the answers to those questions have been answered, Woods firmly said.

Check the police report, he said.

With respect Tiger, they most certainly have not.

I want to make one thing perfectly clear: I am not in the business of speculation.

But this is now the third time he has been behind the wheel in an incident which could have had far more devastating consequences.

The first time was when his infidelity was uncovered by Elin Nordegren in 2009.

A groggy Woods - who had taken a cocktail of painkillers and sleeping pills - got behind the wheel of his Cadillac Escalade.

Then he crashed as he tried to exit his property. What happened next was one of the most spectacular fall from graces we have ever seen.

We all know the story. We've seen the pictures of his car after he crashed into that fire hydrant.

Then in May 2017 Woods was engulfed in another scandal when he was arrested for driving under the influence.

He had five drugs in his system. He simply did not know where he was. Cops found him passed out behind the wheel.

A urine test revealed a mixture of strong painkillers, sleep and anxiety drugs and THC, which is a chemical component of marijuana.

The then 41-year-old later admitted a lesser charge of reckless driving. He avoided jail time, instead having to pay a fine and attend a course.

After both of these incidents Woods has had to work considerably hard to repair the damage.

Now we have this.

We've seen the picture of Woods two days before the crash. In my opinion, he looked exhausted.

I love Tiger Woods but I have to admit I'd love to know what personal responsibility he is taking over this?

He was driving at more than twice the speed limit, according to police records. Reportedly 87mph in a 45mph zone.

Our readers seemed to think this is a private matter and he does not have to give anyone an explanation.

I can certainly see there is an element to that. But it still feels uncomfortable.

Was Tiger Woods right to dodge questions over his car crash?

A group of hand-picked journalists were probably told beforehand not to ask him about this before he emerged again.

When one tried to ask him about it, Woods brushed it aside. Nothing to see here. Please look the other way.

In my view: Tiger Woods does not owe us explanations about his family life. His marriage or his kids.

What he does in his private life has nothing to do with us.

But when you put other road users at risk then it becomes a public matter.

One thing was clear from this press conference and that is how Woods, as a public figure, is most definitely back.

What we will see from Woods the golfer is yet to be discovered.