The Northern Irishman has started well but Justin Thomas and Abraham Ancer are breathing down his neck. 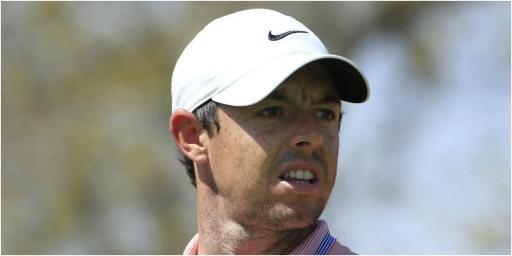 Rory McIlroy battled his way to a three-way tie for the lead in the first round of the Hero World Challenge.

This week the attention may all be on Tiger Woods who is swinging again but the Northern Irishman is trying to take some of the limelight.

Here in Albany, Bahamas, McIlroy, 32 is right where he wants to be and even managed to chip in on his way to an opening 66.

Feeding off the energy of a good start, McIlroy was going well but was left frustrated after he dropped two shots at the ninth.

McIlroy duly recovered and sees himself right in contention in an event that typically sees low, low scores due to the pristine conditions.

The four-time major champion's 66 was matched by Abraham Ancer and Daniel Berger who join him at the summit.

"I mean, I set my standards a little higher I guess but I think I really turned a corner after the Ryder Cup," McIlroy said of his 2021.

"I didn't feel like I played all that well today, I played the par-5s in even par and there's five of them..."

But he added: "Overall the game's feeling much better and I'm pleased with (it).

"Everyone who plays this game knows it comes and goes at times, even for us - the best players in the world."

McIlroy looked in solid form. "That was a beauty Rory," Harry Diamond, his caddie, said of one of his chip shots he executed perfectly.

The Northern Irishman made three birdies before he got to nine but a double bogey came out of nowhere.

McIlroy made three more birdies and an eagle on the back nine.

Morikawa (68) made no mistakes and four birdies until he dropped one at 13.

The brothers are crunching numbers and climbing the leader board. pic.twitter.com/SyycTnKLmF

He recovered to find two more as he headed for home but tugged his second into 18, his ball nestling on the rocks.

Morikawa is searching to become the best ranked player in the world this week and he's made a good start and only trails by two.

A win would see him crown a quite simply sensational year for the Ryder Cup debutant who has just got engaged.

Pristine condition. Not a lot of wind. The best players on the planet. Surely everyone would go low?

Well, not for Harris English it seems, who was the only player (75) to finish over-par through 18 holes.

Elsewhere, Justin Thomas sits two shots behind. An errant tee shot at 18 saw him double the last when he had the lead.

Bryson DeChambeau doubled the last to finish at 3-under when his approach found the hazard.

Webb Simpson is also one back.