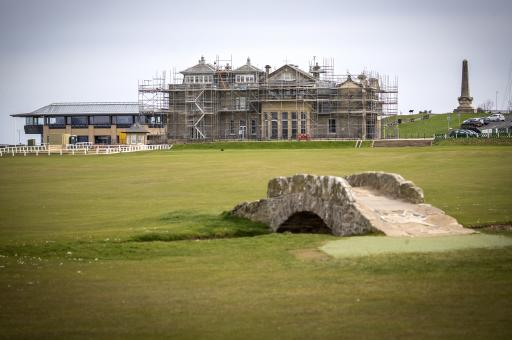 In recent years, if you walked by any top UK or Ireland golf course in the summer months you would have been greeted with a familiar scene, writes UK Golf Guy.

You wouldn’t have had to wait too long before seeing an SUV pull up and a driver help a group of well-heeled golfers out of the vehicle. You would probably smell a whiff of cigar and then catch the American accents.

If you followed them into the pro shop you would be likely to see the jumpers and other merchandise being piled up on the counter, much to the pro’s delight.

Wander with them to the tee and you may well have seen four caddies lined up, ready to make sure the tourists got the most from their visit, as well as a few anecdotes to keep them chuckling in the pub afterwards.

Over the last few years it has become the norm for visitors’ tee-times at top-end courses to be dominated by international visitors. This trend has come along with a quite incredible increase in green fees at these clubs.

I’ve looked at the increase in green fees for a selection of top courses since 2000. The average summer weekend green fee for these courses in 2000 was £88.

Coming in to summer 2020, the average for that same group is over £240. Had the cost increased in line with UK inflation then the average would be only £145.

The highest percentage rises have come at three Open courses - Royal St George’s, Carnoustie and Muirfield. All have gone from sub-£80 a round to over £250. Others, like North Berwick and Cruden Bay, have seen improvements in their course rankings which will have been a catalyst for their increases.

The great Australian golfer, and professor/student of the game, Peter Thomson said that no golf course in the world should charge more than a round at the Old Course, but now a round at Turnberry is almost twice as much.

The increases have been eye-watering, but tee-time sheets have still been filled. There have always been enough visitors willing to pay the prices, while the local market has largely been priced out of playing some of the nation’s most revered courses.

For some, it may be the only visit to these shores in their lifetime and they have been understandably keen to squeeze everything in to their trip. Most golfers from the US won’t have access to the uber-private courses that dominate the top of the rankings at home. So while green fees here have increased, visitors are often surprised and delighted to find that the top UK courses are open at all.

The average green fee for top UK golf clubs has gone from £88 to £241 in the last 20 years. As golf faces into a recession, I’ve put down some thoughts on how clubs could change their approach to attract back the domestic audience. https://t.co/xhb8qq9ZfU pic.twitter.com/ydfnO8oS4B

Social media will have had a part to play too - courses that were previously only a name are now poured over on Instagram - and slick marketing with beautiful drones shots all adds to the ‘must play’ nature of these courses.

On top of that, the pound has weakened significantly over this period so the increases in green fees aren’t felt as acutely when you convert them to dollars. There are many reasons why golf in the UK still has a strong allure for golfers from around the world.

From the clubs’ point of view, the pricing of a green fee is a simple case of supply and demand. If people are willing to keep paying for the tee times then they will keep on putting the prices up.

Most clubs will have a target for green fee income in a year baked into their financial plan and they basically have two levers to pull - the cost to the visitor per green fee and the number of visitor tee times they make available.

Muirfield recently announced they were going for the double whammy next year - adding Mondays to the existing Tuesdays and Thursdays for visitor play and putting the price up another £15 a person too. There’s another million pounds income for them right there.

I know of one course where they found that the more they put their green fees up, the more foreign visitors wanted to play the course! They had a mentality that ‘if it costs that much it must be really good’. Behavioural economics in the real world!

There have been several by-products of this burgeoning green fee income. Some courses have employed more green keepers - you need to keep your place in the rankings and if you drop down the list, you may not be able to get the visitors whose green fees you have come to rely on.

Clubs have invested in refurbishing their locker-rooms, expanding their pro-shops, improving their bars or doing up their practice areas so they can increase revenue per visitor and ensure they give the high-end experience that the green fee demands.

However, this model only works as long as there are people out there willing to visit the courses and pay these green fees.

No-one knows what’s going to happen in the future as we learn to adapt to a world with Coronavirus, but one thing we can be fairly certain of is that there won’t be any international visitors to UK golf courses this season. The impact of that on many clubs who now rely on green fee income will be profound. Clubs will have to dig deep into reserves, some staff will lose their jobs and members may be asked to help their club financially.

I was due to go on a trip to the north of Scotland next week and had prepaid many of the rounds. The courses are keen to hold onto this money and some are being imaginative in their approach. Castle Stuart said that we could play 36 holes instead of 18, at no extra cost, at any time up to 2025 if they could retain our money for now. Cashflow at this time is vital.

If you ask the average UK-based club member whether they are prepared to pay the green fees that many courses are asking today then the answer is generally a resounding ‘no’.

I ran a not-very-scientific poll on Twitter which gives at least an idea of the public’s appetite for paying green fees. And it’s not high. Only 18% of respondents would be prepared to pay over £150 for a round at a top course. These aren’t just your average club golfers, these are people keen enough on the game to follow me on Twitter!

Would appreciate if you could answer & share this for a blog I’m writing. Could you only answer if you live in the UK as I’m trying to get a domestic view. Thx

In normal times, how much are you prepared to pay for a summer green fee at a top UK course? - ie Open rota/top 30 rank

Even when you go outside the very top clubs in the country there are some green fees which look quite incredible. 18 holes at the weekend on Gullane Number 1 is £195, Nairn is £180 and Western Gailes, £185. All of these will be mopping up foreign visitors playing the likes of Muirfield, Royal Dornoch or Turnberry and looking for additional rounds, but the costs are out of reach for the vast majority of local golfers.

While no-one knows for sure what the future holds, I have some thoughts of what we may see. Firstly, international travel is unlikely to get back to previous levels for quite some time. Travel is likely to be a less pleasurable experience, people will be worried about being stranded abroad if the virus flares up, and restrictions on hospitality could just make travelling less appealing.

This will go both ways. We will see fewer visitors to the UK, but conversely, there will be many British golfers who cancel or postpone their annual golf trip abroad. This should provide a great opportunity for domestic golfers to discover the amazing courses we have at home.

However, that’s just not going to happen if courses don’t adapt - and they need to be brave on green fees. If they keep the green fees where they are today then visitor numbers will dwindle and revenue will decline .

So here’s an idea. Top clubs should embrace the domestic market for the foreseeable future. They should cut the green fees significantly and open up attractive times to play. It won’t be good enough to offer cheap rates on a November afternoon, they will need to accept golfers when they want to play.

Golf courses could get together and offer regional packages. Some have done this before in the off-season but wouldn’t it be great to see a group of courses close together, like Muirfield, North Berwick and Gullane, offering a break in summer next year at a reasonable rate and partnering with local hotels to support the area’s local economy? That would have been unthinkable before now, but without the tourist dollar, maybe it could happen?

If UK golf clubs are to survive the green fee recession that is coming their way they will need to adapt quickly. Not only will this help them stay afloat but will also introduce a whole generation of British golfers to the amazing courses they are currently missing out on.

David Jones
Previous
How to dress like Tiger Woods for less than £100
Next
England Golf: coronavirus FAQs on the return of golf

PGA Tour
How much Kevin Kisner and others won at the PGA Tour's Wyndham Championship
PGA Tour
Abraham Ancer won HUGE MONEY at the WGC-FedEx St Jude Invitational
Golf news
Manchester United players tee it up at St Andrews ahead of Premier League season
PGA Tour
"HE'S THE GOAT": Dustin Johnson on spending time with Wayne Gretzky
The Open Championship
Collin Morikawa: BURGERS were the secret to my Open win!