Abraham Ancer has put to bed any rumours around the supposed controversy with Tiger Woods. 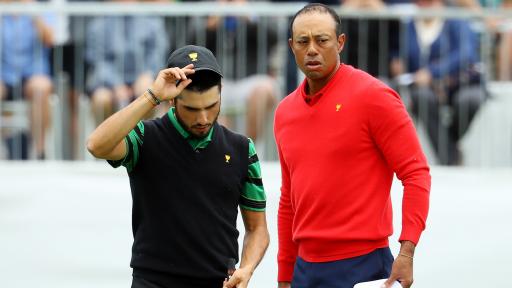 Abraham Ancer was one of the star performers of the Presidents Cup and was arguably the best player for Ernie Els' International side. After losing to Tiger Woods in their singles match, Ancer has come under the firing line on social media, with many golf fans treating him with a 'got what was coming to him' attitude.

Following his final round at the Mayakoba Classic in November, Ancer was asked who he would most liek to come up against during his debut at the Presidents Cup.

“I would like to play against Tiger,” Ancer said at the time.

Tiger was clearly aware of Ancer's wishes and whether it was tactical or not, the 15-time major champion picked himself to take on the Mexican in the opening match of Sunday's singles.

Woods went on to beat Ancer 3&2 and the American fans wasted no time in reminding Ancer of his previous wish and then rubbing the defeat in his face.

Abe Ancer: I want to play against Tiger

After their match, Woods added some fuel to the fire when he said: "Abe wanted it, he got it."

Of course, this triggered even more Tiger fans to stir the pot some more.

Tiger said “Abe wanted it, and he got it.” Tiger is just a cold blooded killer lol pic.twitter.com/p1VDqxGTfy

Speaking to the media himself, Ancer wanted to assure the world that his comments after the Mayakoba Classic were said in a hope to play against the best, not out of arrogance.

“When they asked me that at Mayakoba, first of all that question was in Spanish, so the tone when I said it, it was never like cocky or challenging or anything like that,” Ancer said. “At the moment I thought it would be a great experience, which it was. No matter what, with the outcome of the match, I would have gained a lot. I would have become a better player just from being in that situation.”