Adam Scott looks to climb ladder after falling 40 places down world rankings in 2018. 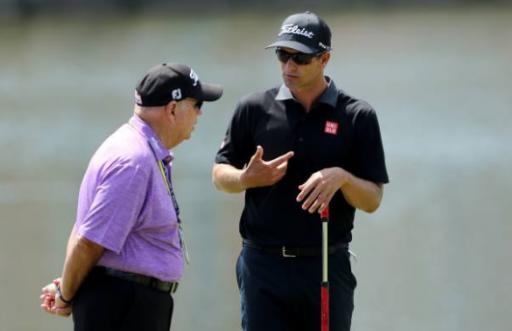 Adam Scott has switched back to the long putter at this week's Players Championship in a bid to improve his lowly world ranking position and secure a place in next month's US Open, which he is not currently exempt for.

The issue? A cold putter. Actually, a freezing one. The 2013 Masters currently ranks 193rd in strokes-gained putting. The answer? An old friend, Scott hopes.

Fourteen years after he captured the trophy at The Players Championship, Scott returned to TPC Sawgrass on Monday with a long putter protruding from his bag.

“It’s easy to see why I don’t have good scores on four rounds, because two of the days my putting is well below average. And that just makes it almost impossible to compete,” said Scott. “I need to be average putting to be competing, which doesn’t sound that hard to do, really. I should be able to do that.”

He added: “I’ve spoiled a lot of good golf with a few balls in the water and doubles at inopportune times. Momentum killers,” Scott said. “When your confidence isn’t right there, and you’re fighting to get it back up, that’s kind of shattering. Because it can take you 18 holes to work yourself back to the position you were, and then the tournament’s over and you’re nowhere again.”

With the rest of Scott's game relatively strong on paper, ranking 21st strokes gained: tee to green and 25th in strokes gained: approach, the 13-time PGA Tour winner knows even a moderate week with the putter could change things quickly.

But on the verge of missing next month's US Open at Shinnecock Hills, which would mark his first absence from a major tournament since the 2001 US Open, Scott knows he must get a wriggle on. Scott currently has a streak of 67 straight majors, only second to Sergio Garcia among active runs on Tour.

In order to avoid sectional qualifying for the US Open, Scott must make his way into the top 60 of the world rankings by either May 21 or June 11 - only he's trying not to think too much about it.

“I honestly haven’t really thought about it,” he said. “I’m trying to be optimistic and think I’ll have a couple good weeks and get myself into it.”

The Players
long putter
The Players Championship
TPC Sawgrass
PGA tour
<
Previous
Casey and Dufner defy PGA Tour autograph policy at The Players
>
Next
Tiger Woods on stealing his dad's 1-iron and honing his patented stinger
Latest News
Equipment news
Bad blood and "p***ing off" players: LIV Golf's headache for OEMs
Golf news
GEO Foundation launches Sustainable Scorecard as part of special week
Golf news
Paige Spiranac opens up on size, fat-shaming and being "a loser"
Golf news
England cricket star Jonny Bairstow ruled out for 2022 after freak golf injury
Equipment news
Charley Hull: What's in the bag of The Ascendant LPGA champion
Latest Reviews
Drivers
Are they WORTH IT? Titleist TSR Driver Review | TSR2, TSR3, TSR4
Irons
Caley Golf Iron Set Review | Is this the best value iron of 2022?
Putters
Zebra Putter Review | "One of the most popular golf products ever!"
Wedges
A Spin MACHINE! Callaway JAWS Raw Golf Wedge Review
Wedges
Their BEST Yet?! TaylorMade Hi-Toe 3 Golf Wedge Review
Equipment Reviews
Equipment
FootJoy's Blues Collection is perfect for your game this summer!
Equipment
Peter Millar have an AMAZING selection of golf shorts!
Equipment
The BEST PUMA golf polo shirts as seen on the PGA Tour!
Equipment
The BEST Nike Golf shirts as seen at the PGA Championship
Equipment
NEW VICE Pro Drip Silver Hills Golf Balls: Limited Edition
Latest Tips and Instruction
Tips and Instruction
DP World Tour pro Hurly Long and his meditation technique...
Tips and Instruction
Learn how to chip like a winner on the DP World Tour!
Best tips and instruction
What can we learn from Jordan Spieth's new pre-shot routine on the PGA Tour?
Tips and Instruction
How to NEVER MISS another short putt with Manolo Vega!
Tips and Instruction
Sergio Garcia tells Me and My Golf GREAT driver tip: "Pull the chain!"
Related Articles
PGA Tour
Rickie Fowler at Wells Fargo: "I'm trying to be better than I ever was"
DP World Tour
"I've been so bad" Eddie Pepperell can't believe he's just made a cut
The Masters
The Masters: "Hungry" Cameron Smith says mum finally likes his hairstyle
PGA Tour
WGC Match Play referee on DeChambeau-Pieters mix-up: "Nothing we could do"
PGA Tour
Collin Morikawa: "You put it as a funk, I put it as a learning experience"