Blind golfer Jim Gales MBE dazzled in a bright pair of Bedlam’s latest trousers at the EDGA Algarve Open, before later joking “I thought they were black”.

The secretary and founder of the Scottish Disability Golf Partnership is an ambassador for the brand, famed for their playful designs. 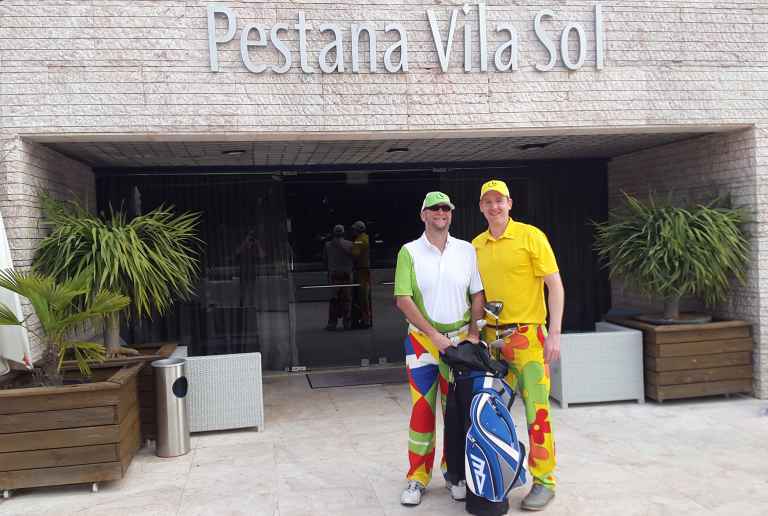 Gales, who plays with a guide, said:  "I went out to the range to hit a few shots before my round and I was getting a few comments about my smart new trousers.

"I thought it was a bit strange - Alan and my wife told me they were black. As it turns out, Bedlam don't do black trousers. But I certainly got plenty of attention and I love them.

"I suppose you could say I've seen the light!"

The 52-year-old Scot from Springfield, Fife lost his sight to Retinitis Pigmentosa in the late 1980s and had never picked up a golf club before he became blind. His vision is now restricted to just light perception but it has not stopped him from registering 10 victories in disability golf Open events around the world.

He said: "It probably helps to not be able to see the trouble off the tee sometimes. Mind you, it doesn't stop me lifting my head up on my swing though. Alan says: ‘Why lift your head up? It's not as if you're going to see where it goes'. He's got a point!"

Gales was awarded an MBE for services to disability golf and his dress sense saw him pick up another impromptu honour as the best dressed golfer at the prize-giving ceremony.

Bedlam clothing is on the market at a reasonable price, with trousers starting from £34.99 and shirts at £24.99.