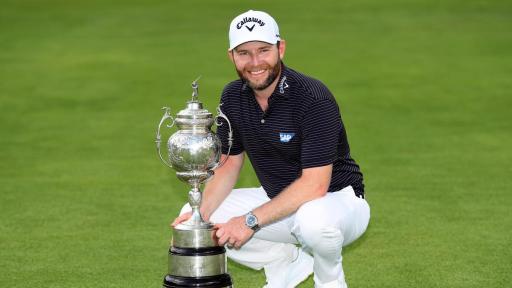 Branden Grace shot a fantastic final round of 62 to beat defending champion Louis Oosthuizen by three shots at the South Africa Open. It's the South African's ninth European Tour victory and his first since 2017.

It was a much needed win for Grace, who has seriously lacked in form over the last year, dropping to 129th in the world rankings before the start of the tournament, but his latest victory has now surged him up to 73rd and also guaranteed him a spot in The Open Championship at Royal St George's later this year.

Defending champion Oosthuizen went into Sunday's final round holding a one-shot lead and was the heavy favourite to win his local tournament once again, but a slow start saw the Johannesburg hero just level par through the first seven holes, allowing Grace to make his way to the top of the leaderboard.

Grace, 31, made birdies at the third, fifth, seventh and ninth, alongside a phenomenal eagle at the fourth, to make the turn in just 30 shots, while Oosthuizen piled on the pressure and took the lead when he made an incredible hole-in-one at the 211-yard par three eighth.

Not allowing the ace to get in his head, Grace kept his composure and made four consecutive birdies from the 11th through to the 14th and pars over the next three holes put Grace out of sight coming down the last.

Slightly pulling his drive into the rough coming down 18, Grace's approach shot fell well short of the green, but he kept his composure with a beautiful approach shot which landed eight feet from the hole and the South African rolled in the putt to secure victory.

It was a huge day for Marcus Armitage who rolled in a 15-foot putt for birdie at the final hole to secure solo third place and a spot at The Open Championship. Armitage, nicknamed 'The Bullet', had a local caddie on his bag for the tournament in South Africa, but going by the caddie's reaction, could Armitage have possibly told his caddie he could be on his bag for The Open if he qualified? Watch his epic celebration below:

One putt for a place in The Open.

Branden Grace played some stunning golf throughout Sunday's final round, but GolfMagic's shot of the day has to go to Louis Oosthuizen for his hole-in-one at the eighth. A 211-yard par three isn't everyone's favourite kind of hole, but the 2010 Open Champion pulled a stunning shot out the bag to take the lead. Watch Louis' epic ace below: