Koepka just can't resist another snipe at DeChambeau as he works on his core... 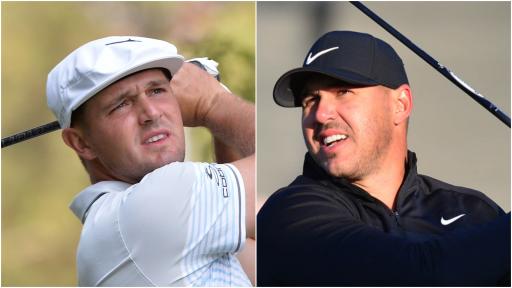 Brooks Koepka took to Instagram to fire more shots at Bryson DeChambeau while isolating at home during the lockdown due to coronavirus, this time by working on his core in front of his four major trophies.

Koepka working on his 6 pack in front of his 4 pack pic.twitter.com/thpKUTptVM

DeChambeau, yet to win a major, and four-time major winner Koepka have been involved in a back-and-forth war of words over the past eight months, all really starting at The Northern Trust at Liberty National last August.

A video emerged of DeChambeau taking over two minutes to hit a 10-foot putt, which he went on to miss.

One player who had something strong to say on the matter was none other than Koepka, who quite frankly (like the rest of us) detests anything to do with slow play.

DeChambeau took offence to Koepka's comments and the pair had a conversation before their final round. Both players denied any form of altercation and DeChambeau said that he learnt a lot from his discussion with Koepka.

Months later, DeChambeau went on an intense fitness journey that saw him pile on some serious mass in an attempt to keep up with the Tour's biggest hitters such as Koepka.

As a result, DeChambeau currently leads the PGA Tour when it comes to average driving distance at more than 320 yards.

In January, DeChambeau was discussing his physique live on his Twitch channel where he claimed he now weighs "significantly more" than his Ryder Cup team mate, while also saying that Koepka "has no abs."

Koepka soon hit back at DeChambeau's comments by posting an image of his four major titles in an Instagram photo, with the caption: "You were right @b_dechambeau I am 2 short of a 6 pack!"

You were right @b_dechambeau I am 2 short of a 6 pack! pic.twitter.com/aCJ1jimId6