Brooks Koepka HITS BACK at Nick Faldo on Twitter

Brooks Koepka trolled Sir Nick Faldo during the final round of the RBC Heritage. 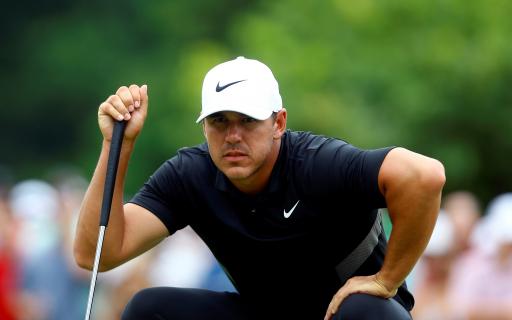 Brooks Koepka has always been the sort of player to say it how it is and has no problem with upsetting a few people along the way, given his past clashes with Ryder Cup team mate Bryson DeChambeau and Golf Channel analyst Brandel Chamblee, but his latest dig was towards commentator and golf icon Sir Nick Faldo.

Speaking to the media after posting an opening round of 67 at Harbour Town Golf Links in South Carolina, Koepka was asked to share his thoughts on players being mic'd up to add some more entertainment on the PGA Tour whilst spectators are kept away.

“I don’t understand why they want us to wear a mic when there’s a boom mic that stands 10 feet away from every shot that I hit,” he said. “If the announcers would just shut up and listen, you could hear every word that we’re talking about. I don’t understand what the thing is. Half the time the lady’s holding a boom mic, and she’s listening to everything we’re saying all the way down. If they would just shut up, they could hear everything.”

Faldo, a six-time major champion and now CBS Sports commentator, took Koepka's comments on board during his round on Friday, albeit with a hint of sarcasm.

This is GOLD from ⁦@NickFaldo006⁩!!

After Koepka striped his tee shot down the 18th fairway, Faldo said: “He told we announcers to shut up; let’s see here what he has to say about that one."

Waiting for some kind of reaction from Koepka, there was a moment of silence, before he turned to his caddie and muttered a few words, teeing up Faldo to land a devastating blow: "Yeah, fascinating stuff."

During Sunday's final round, Koepka hit one of the shots of the day when he drove the green of the 330-yard par-4 9th, leaving a tap in for eagle.

Later that day, play was suspended due to an incoming storm, so Koepka decided to use the break to poke back at Faldo, tweeting a video of his eagle along with the comment: "Fascinating stuff out there..."

Fascinating stuff out there... https://t.co/mjxuDUEtax

NEXT PAGE: Rory McIlroy unlikely to return to RBC Heritage: "I remembered why I haven't been here for a while."