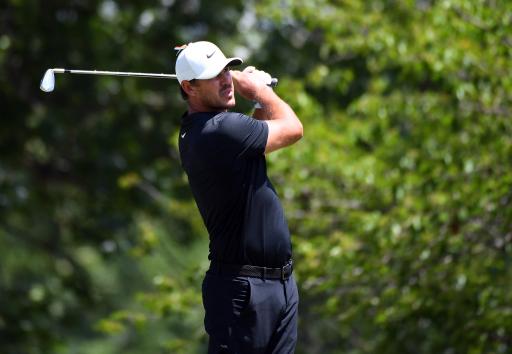 Koepka couldn't resist a sly dig at DeChambeau after finding himself by the same tree that was the subject of an anthill ruling on Thursday in Memphis...

Brooks Koepka couldn't resist a dig at Bryson DeChambeau after finding himself by the same tree that was the subject of an anthill ruling on Thursday in Memphis...

In case you missed the controversial moment on day one, DeChambeau attempted to stretch the rules of golf in order to get a free drop. A PGA Tour rules official approached him and refused any free drop ruling, and he would go on to make a double-bogey six.

RELATED: BRYSON TRIES TO STRETCH THE RULES OF GOLF

Unfortunately for Koepka, that was about his only laugh of day two as he slumped to a disappointing 1-over 71 to fall four strokes off the pace heading into the weekend.

Koepka's ball striking was once again on point but his issues came on the greens, particularly on the par-4 2nd hole when he three-putted from three feet.

DeChambeau also struggled with a 3-over 73 and he moves well down the field and 11 strokes off the lead.

Back-to-back birdies to finish his round. @RickieFowler is just two off the lead heading into Saturday. #QuickHits pic.twitter.com/rbXapdBfS4

Brendon Todd carded a 5-under 65 to take a two-stroke lead into the weekend on 11-under par. Rickie Fowler moved up to 9-under par following a 3-under 67.