Koepka tells Golfweek he has some "regrets" over what he said at the PGA Championship, but that he has no intention of discussing things with Dustin Johnson... 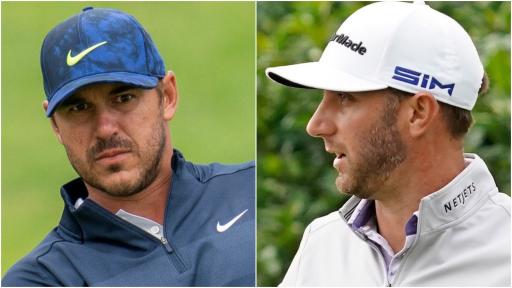 Brooks Koepka has told Golfweek he "regrets" some of the comments he made heading into the final round of the PGA Championship, but that he has zero intention of discussing the situation with Dustin Johnson.

Four-time major winner Koepka trailed Johnson by two strokes with 18 holes to play at TPC Harding Park on Sunday, and then bragged about how many major titles he had in relation to those around him on the leaderboard.

"A lot of the guys on the leaderboard, I don’t think have won, I guess DJ has only won one," said Koepka. "I don’t know a lot of the other guys up there."

Koepka went on to shoot a dismal final-round 74 to finish 10 strokes behind eventual winner Collin Morikawa in a tie for 29th.

With a couple of days to think about his comments and performance heading into this week's Wyndham Championship where he starts joint tournament favourite, the former World No.1 admits the fire will always burn when he finds himself in contention, especially for a major, but that he does wish he had "used different words" on Saturday night.

GolfMagic debate Koepka's controversial comments in the video below...

"I honestly was struggling coming down the end of the third round," Koepka told Golfweek.

"I was well back and I saw DJ was at 9-under. I birdied to get to 7-under. I was focused on Dustin.

"I had no idea who was at 8 or with me at 7. To be honest, when I’m looking at a leaderboard I’m never looking at who is behind me or tied with me, I only look ahead. I view myself as going forward no matter what.

"So I regret that part of it. That’s what I was trying to say... that I didn’t know who was on the leaderboard at that point because I hadn’t looked. I just genuinely didn’t know the guys at 8 and 7.

"That part I regret and I wish I had used different words because I didn’t pay enough attention to who was under Dustin because he was my main focus.

"When someone asks if I can win, I’m always going to say yes, that’s the competitor in me. I’m not there to finish second. I think that’s where some of the cocky stuff comes from because I always think I can win and truly believe it."

Rory McIlroy admitted after the tournament that he found Koepka's comments disrespectful to Johnson, especially given he has won "three times as many tournaments" on the PGA Tour than Koepka.

But Koepka has made it clear he has no intention of contacting Johnson to discuss his comment any time soon.

"That’s not something I’m planning on doing," Koepka told Golfweek.

Johnson would go on to shoot a 68 but finish in a tie for second with England's Paul Casey, two strokes behind Morikawa.