Bryson DeChambeau crushes drive down 7th, then HEAD COMES OFF!

DeChambeau smashes drive down the par-4 7th, then his driver head snaps off his shaft... 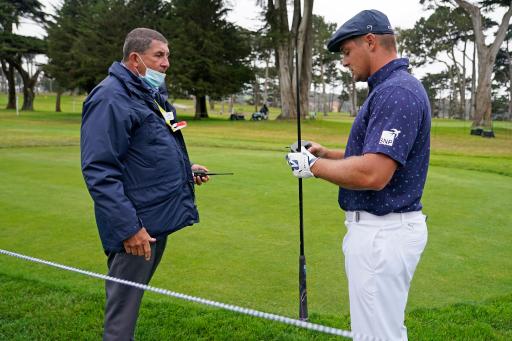 Bryson DeChambeau crushed his drive down the par-4 7th hole on day one of the PGA Championship, and then saw his driver head snap off his shaft after bending down to pick up his tee.

Thankfully for DeChambeau, he was able to get a member of his team to pick up his spare driver shaft from the locker room and replace it by the time he walked to the 8th tee.

"Just swinging too hard," said DeChambeau as he laughed the incident off down the fairway.

Oops! Bryson DeChambeau broke his driver in Round 1 when leaning on it to pick up his tee after his tee shot. pic.twitter.com/XUHmTxOrHo

RELATED: BROOKS FIRES EARLY SHOTS AT BRYSON AT THE PGA

"You have to feel there was a lot of stress fracture in that shaft as there was not a huge amount of pressure placed on that shaft," said Sky Sports Golf's Nick Dougherty during the live day one coverage at TPC Harding Park.

DeChambeau was able to replace the shaft in his driver due to not deliberately breaking it. This comes under 'Model Local Rule G-9 - Rule 4.1b(3) is modified in this way':

"If a player's club is "broken or significantly damaged" during the round by the player or caddie, except in cases of abuse, the player may replace the club with any club under Rule 4.1b(a).

"When replacing a club, a player must immediately take the broken or significantly damaged club out of play, using the procedure in Rule 4.1c(1)."