Brooks Koepka off to fast start at PGA, then burns Bryson DeChambeau

Jason Day and Brendon Todd hit the front on day one at PGA Championship... 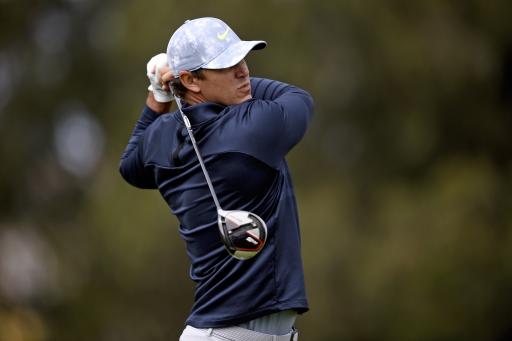 Brooks Koepka got off to a fast start in his bid to win a third consecutive PGA Championship, and then roasted Bryson DeChambeau in his post-round interview.

Koepka carded six birdies and two bogeys en route to a 4-under 66 to lie one stroke off the pace in the early wave of day one, with 2015 PGA champion Jason Day out in front on 5-under par.

After finishing his round, Koepka was more than happy with his start but - as has become the norm these days - could not resist a sly dig at DeChambeau's "scientific" approach to the game.

"I feel good, I'm playing good," said Koepka. "There's no reason to be scientific with all the numbers and stuff like that on TrackMan, so I just go out and play."

Should Koepka go on to win the PGA Championship this week, he would become just the seventh player in the history of the game to win a major three consecutive times, something not even Tiger Woods or Jack Nicklaus have ever achieved.

RELATED: THE SIX GOLFERS TO HAVE WON A MAJOR THREE CONSECUTIVE TIMES

Koepka trails Day and Brendon Todd after 18 holes after the pair carded impressive rounds of 5-under 65.

Day, who is bidding to win the PGA Championship for the second time in his career having lifted the Wanamaker Trophy at the historic Whistling Straits, carded a flawless round of 65 featuring five birdies.

Justin Rose joined Koepka on 4-under par in a logjam tie for second, while Tiger Woods got off to a solid start with a 2-under 68 that was matched by Bryson DeChambeau later in the day - despite his driver head coming off his shaft following his drive down the 7th hole - WATCH HERE.

Rory McIlroy failed to get much going on day one, but despite finding himself 2-over par after his first five holes managed to recover for a level-par 70.

Newly promoted World No.1 Justin Thomas posted a lacklustre 1-over 71.