Interview conducted by Women & Golf, just days before Booth qualified for the US Women's Open.

Few figures in golf are more recognisable than Carly Booth. Talented, attractive, and social media savvy, the Scot has garnered a profile which hugely eclipses that of many of her competitors.

The youngest ever club champion in Scotland at the age of just 11, a professional by the age of 17, and a multiple winner on Tour before she left her teens, many touted Booth as a future World No 1. But after eight years on Tour, and having not won since 2012, Booth has struggled to fulfil the lofty expectations placed upon her.

But with a top-10 finish already under her belt this season and last week's sectional qualifying victory to reach the US Women's Open, the Cobra Puma staff player appears back on an upward curve in 2017. 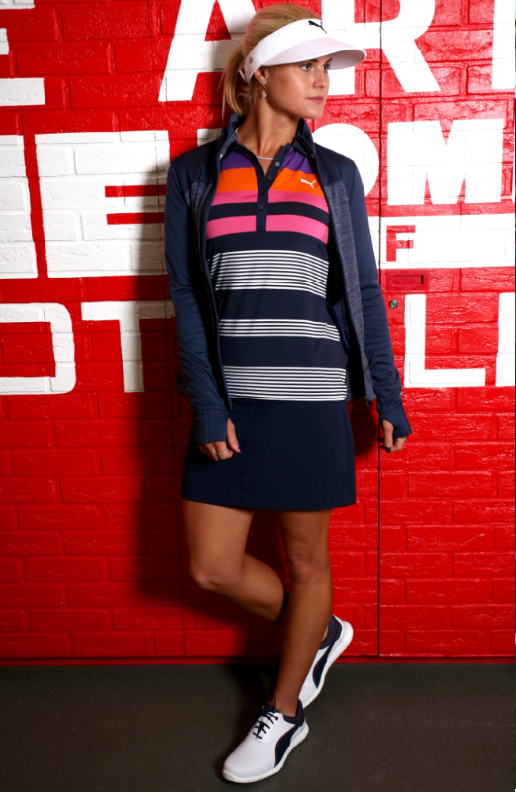 What does a usual day in the life of Carly Booth involve?

Normally being woken up by my Jackapoo. I usually workout for an hour, before heading to practice. Perhaps hitting some balls, doing some short game, then going to play nine holes

You’re clearly in fantastic shape. Do you think it’s essential to work out to be at the top of the game? Some people for instance would say that Tiger may still be playing now if he hadn’t placed such strain on his body?

I believe it’s how you train that is important. Training in a way that doesn’t overload your muscles. Yes, you need to be strong for golf, but you also need to be supple. I personally love to train and do a lot of cardio. For instance, the US Open qualifier is 36 holes. That’s a lot of golf, and to concentrate over the closing stretch needs a certain element of endurance.

Are you finding it difficult to play at your best considering the big gaps in the Ladies European Tour schedule this year?

The LET is working hard to get more events together for us. No it isn’t ideal, we’d all love to be playing more. But the situation right now is that there aren’t enough events and we have to make the most of it. I love being at home in Manchester, spending time with my partner. There are perks. Over the winter months we have events almost every week so you almost have to flip your perspective and play the summer as the off-season.

Your partner is only a beginner to golf. That must make for an interesting dynamic when you are on the course.

It’s actually great. He works in finance so it’s nice to come home to someone who isn’t also thinking about golf. I’ve dated a golfer before and if you’re both struggling on the course, it’s easy for those problems to compound into your personal life.

You’re known for having a strong presence on social media. Do you think that the rise of female players using social media to enhance their profile is good for the women’s game?

As far as I’m concerned anything to grow the women’s game is a good thing. Some people say, ‘do you want to be a model or a golfer?’ I just think what I post is what I’m doing in my day, whether that’s working out, practising, or taking selfies, if you don’t like it then don’t follow.

There was a lot of negativity surrounding the ShopRite poll, arguments that the event picked out the most attractive four players regardless of ability, but why would I not want the chance to play on the LPGA? That poll brought more publicity to the event than any other usual form of media promotion would. I mean, I had a shout-out from The Rock. Why not utilise that opportunity?

Paige Spirinac gets a lot of slack. Personally, I think what she has done for the game is great.

Tiger’s garnered a lot of negative publicity over the DUI arrest. Do you think this is unwarranted?

I saw a tweet from Gary Player earlier saying that Tiger needs our support right now, not for people to cut him down. I couldn’t agree more. He’s my hero and done so much for the game. I know the media need a story but there’s an element of respect. The game wouldn’t be where it is now without him. Can you imagine being the best in the world at something and then not being able to do it anymore. That must leave a huge void in your life. It’s no surprise he’s struggling.

When we caught up with you last year you spoke about the Solheim Cup at Gleneagles being your main goal. Is that still the case?

Yes. Playing the Solheim in my home country has been an ambition of mine for a long time. Alongside playing on the LPGA, that’s what I practise for.

Many people say that you are an unfulfilled talent. How would you respond?

After my amateur career, there was huge expectation on me to rise to the top. When I won three times in 2012 that was a big weight off my shoulders, but the next season was a tough lesson. It’s all mental. When I was winning I was so full of confidence that after tournaments I’d take a few days off, not even touch a club. Then when I started to struggle, I was hitting the range all the time trying to solve my problems. Doubting myself, and my swing. That’s not good for your game.

I finished T-8 in Morocco earlier this year, and one of the commentators said of my performance that I had not managed to live up to my promise. I have to remind myself and others that, yes, I’ve been on tour for eight years but I’m only 24. Lee Westwood didn’t peak until his late-30s. There's nothing wrong with top-10 finishes, if that was any other 24-year-old their performance would have been praised.

The Scottish Open is always one of my favourite events. Being my home open, having won the tournament in the past, and now having it co-sanctioned with the LPGA. Can’t wait.

You switched to Cobra clubs last October after Nike announced they were exiting the equipment market. How are you liking your new clubs?

They were the only clubs I tried before the switch, and so far, no regrets. I changed swing coach shortly after, and am certainly hitting it far more consistently now.