12-year-old golfing phenomenon Xavier Perez has signed a name, image and likeness deal with Cobra Puma as he has dominated junior golf in America. 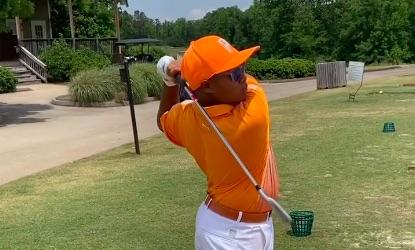 GSE Worldwide, one of the largest sports marketing agencies in the world, announced the signing of 'Xeve' and this has led to the deal with Cobra Puma.

Perez has already earned many accolades such as winning the 2020 Hurricane Junior Golf Tour Georgia Junior Open 11- to 13-year-old division at the age of 10.

We’re excited to welcome Xeve “X Man” Perez to the COBRA Fam. Xeve is a 12-year-old that has taken the golf world by storm and has his sights set on the tour. Watch out @PGATour… pic.twitter.com/knYROlVOpa

Agent Brett Falkoff, who works with PGA Tour star Bryson DeChambeau, said of Perez, "He hits the ball further than any 12-year-old I have ever seen," The young man certainly has a huge future ahead of him.

"Xeve’s personality, talent and love for the game is inspiring, and we’re thrilled to welcome him to the Cobra Puma Golf family," said Dan Ladd, the President and General Manager of Cobra Puma.

"He is a fantastic talent and role model, which aligns with our mission to push the game forward and inspire the next generation of golfers. We’re excited to be part of his journey."

"His larger-than-life personality and well-mannered demeanour will set him apart, and we feel that combined with his work ethic and passion for the game, it’s only a matter of time before he takes the golf world by storm," Falkoff added.

As well as signing with GSE Worldwide and Cobra Puma, Perez has also penned deals with EasyPost, JumboMax and OnCore.

Next Page: Rules of golf: Are you allowed to do this during your practice routine?