Could Dustin Johnson win a major this year?

In the latest episode of the GolfMagic chat show, we discuss Dustin Johnson's performance at the Travelers Championship, plus there's a chance for you to win a pair of Puma RS-G shoes! 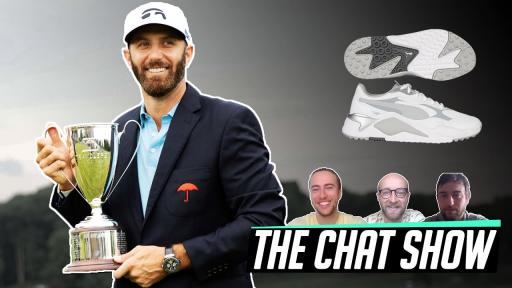 Dustin Johnson's victory at the Travelers Championship extended his impressive streak of winning every season on the PGA Tour since he started back in 2008 and with golf's major championships delayed until later this year, now could be the perfect time for DJ to get back to his best.

In the latest episode of the GolfMagic chat show, we talk all things Travelers Championship, Johnson's solid performance, our bets for the Rocket Mortgage Classic and find out how you can win a pair of Puma RS-G shoes.

It was an eventful final day at TPC River Highlands, but Dustin Johnson showed signs of his former World No.1 ability and overcame a few sloppy mistakes to beat Kevin Streelman by a shot.

Play was suspended due to a weather warning and lightning threatened Connecticut and Johnson bogeyed the par-3 16th when play continued, halving his lead to one.

Streelman needed a birdie down the final hole to put Johnson under pressure, but without the all-important 3 he was looking for, Johnson made par at 17 and 18 to claim his 21st PGA Tour title.

Johnson's last victory prior to the Travelers came at the WGC-Mexico Championship in February last year and his latest win not only continued his streak, but means he has the most PGA Tour wins since 2008, level with Tiger Woods.

CAN DJ WIN A MAJOR THIS YEAR?

As impressive as the World No.3's PGA Tour record is, Johnson only has one major championship to his name, a number that he will be keen on improving.

Johnson has struggled to find his best form over the last year, but certainly looks like he's on the right path given his performances in recent weeks.

Switching to a TaylorMade Truss putter, Johnson's putting was the best we have seen for a very long time and if he can continue to putt at that level and eliminate the sloppy mistakes he's made in recent tournaments, he could well be lifting his second major trophy at some point this year.

@DJohnsonPGA worked hard on the greens during the layoff. It paid big dividends at @TravelersChamp.

We've teamed up with our friends at Puma to offer you the chance to win a pair of the new RS-G shoes.

This week, the PGA Tour heads to Detroit for the Rocket Mortgage Classic, so check out Andy and Jack's best bets below.

NEXT PAGE: New Nike Flight football RIPPED for looking like a golf ball!