Bryson entertained the crowd and went full throttle - but his efforts weren't quite good enough and he was knocked out in the final eight. 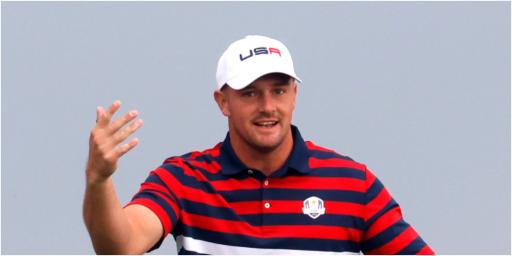 DeChambeau, 28, made it through to the final eight players but he was knocked out in the round before the semi final.

The 28-year-old defied the odds to make it to that point but he came up short in his last set and couldn't muster a huge bomb.

He embraced the competition and achieved greater ballspeeds as the tournament progressed as the sun set in Mesquite, Nevada.

DeChambeau's finished sixth out of a field of 80 players.

Kyle Berkshire won the tournament, becoming a two-time world champion with a drive of 422 yards in the final against James.

With a drive of 422 yards Kyle Berkshire is STILL your WORLD CHAMP! pic.twitter.com/0RI3UFJmxJ

DeChambeau's longest drive in his final set was 391 yards, but it wasn't good enough to advance to the semi final.

There were more than 30,000 viewers watching live on YouTube as DeChambeau stepped up to the tee box for his first drive of the day,

He was up against two massive, massive hitters in his first set in Borgmeier and former champion Berkshire.

And DeChambeau was pumped up, roaring as he smashed one 406 yards with ballspeed of 218mph to tie for second in set one of five.

Let's f***ing go yelled the commentator, adding: "Are you not entertained?!"

The bubble number to reduce the field from 16 to eight was described as usually approximately 450 yards.

In the second set, DeChambeau tied for third with his longest drive going 386 yards.

DeChambeau tied for second in his third set with a drive of 403 yards as there was a logjam in the leaderboard.

It meant he was he eighth place, right on the bubble, with two sets left.

The fourth set was an absolutely huge one for DeChambeau's chances as he really needed a second to get through.

His best ball of 396 yards was beaten by one yard as he took a tie for third despite achieving a ballspeed of 219mph.

It looked likely that 500 points would be enough for DeChambeau to get into the final eight.

Before the DeChambeau's fifth and final set he was given a pep talk by Berkshire.

And it worked, as he took his final set with a longest ball of 394mph.

Canada's Ryan Gregnol - trying to get into the final - fell to the floor injured with what looked like a torn hamstring.

DeChambeau made the final eight on the cut line, securing 500 points over his first six sets.

He came up short in his final set of six balls as Borgmeier, a firm favourite, was comfortably past him.