Dustin Johnson finally got his hands on the FedExCup as he beat Xander Schauffele and Justin Thomas by three shots. 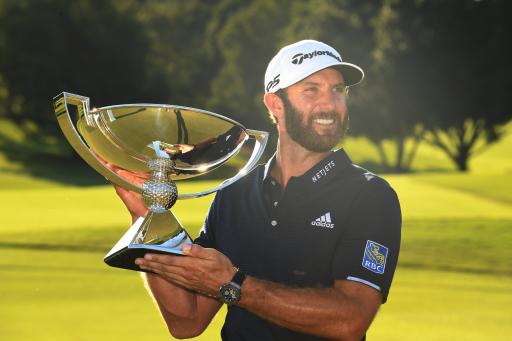 Dustin Johnson overcame a nervy final round at East Lake to finally win his first FedExCup after he claimed the Tour Championship by three strokes.

Heading into the final round with a five-stroke lead, it looked as though Johnson was going to run away with the FedExCup, but Xander Schauffele and Justin Thomas continued to pile on the pressure and coming down the stretch, Johnson was only two ahead.

Johnson, who has changed putter multiple times this season, holed a number of testing putts, including a par save from outside 20 feet on the 13th hole.

The World No.1 started well opening his final round with two pars, before he rolled in a 20 foot putt for birdie at the 3rd and added two more birdies to the scorecard at the 5th and 6th, however back-to-back bogeys followed which allowed his closest rivals to close the gap.

Schauffele, who putted brilliantly all week, made birdies at the 11th and 12th to put himself just two behind Johnson, but when Schauffele made his only bogey of the day at the 13th, Johnson holed a clutch par putt to extend his lead to three.

Thomas, playing in the group in front of Johnson and Schauffele, put himself back in contention with an excellent birdie at 16 to get within two, but blocked his drive way right at the 17th to drop a shot.

Schauffele rolled in another putt for birdie at the 16th while Johnson could only par, but Schauffele failed to capitalise at the next after finding the bunker from the tee, which led to a classy par save to match Johnson.

Johnson showed his confidence at the final hole when he ripped a 337-yard drive straight down the middle of the fairway of the par-5 18th which led to another birdie to card a final round of 68, to finish the tournament 21-under par, having started at 10-under par.

Schauffele and Thomas shared second place, with Jon Rahm in fourth and Scottie Scheffler in fifth.

NEXT PAGE: How much every player won at the PGA Tour's season finale