Johnson and Koepka involved in brawl just hours after USA's heavy defeat to Europe at the Ryder Cup. 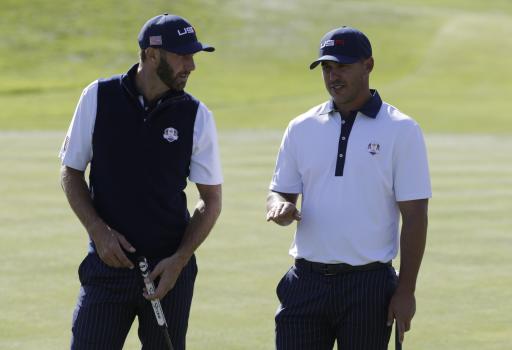 Dustin Johnson and Brooks Koepka reportedly came to blows after they had been invited into the European Ryder Cup team room just hours after the United States suffered a heavy 17.5-10.5 defeat at Le Golf National.

According to reports, witnessess recounted how the American duo - supposedly very close friends - got into a brawl and had to be separated by other players and officials.

It is claimed that Koepka threatened to "flatten" Johnson.

Johnson and Koepka partnered together in the Saturday's foursomes when losing to Justin Rose and Henrik Stenson 2&1.

The source of friction remains unknown between the world number one and three-time major champion, but no doubt more will come to light in the coming days.

Johnson's fiancee Paulina Gretzky was reported to have been close by to the incident, as too one of the European players' wives.

One insider reported that Gretzky was "clearly shocked and upset by the nastiness, which was very threatening."

Two weeks ago, Gretzky deleted all pictures of Johnson from her Instagram page.

Despite that, Johnson and Gretzky were pictured together at the Ryder Cup.

The fallout between Johnson and Koepka comes 24 hours after Patrick Reed - dubbed by many as "Captain America" - lashed out at Jordan Spieth and US Ryder Cup captain Jim Furyk.

NEXT PAGE: REED LASHES OUT AT SPIETH AFTER DEFEAT