Masters champion was unhappy to be dropped for two sessions at Le Golf National. 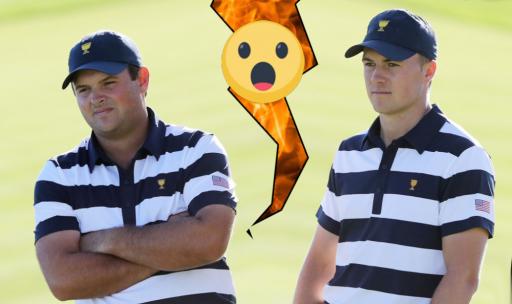 Patrick Reed admitted egos were a problem for the American team as he blamed Jordan Spieth for the end of their successful Ryder Cup partnership, writes Phil Casey at the Press Association Sport.

The Masters champion claimed it was “not smart” of United States captain Jim Furyk to leave him out of two sessions at Le Golf National as Europe regained the trophy with a resounding seven-point victory.

Reed and Spieth had won four and halved two of their seven matches together at Gleneagles and Hazeltine, but Reed was twice paired with Tiger Woods and Spieth played four matches with Justin Thomas in Paris.

That was the subject of the final question of the American team’s press conference on Sunday evening, with Spieth answering diplomatically: “We were totally involved in every decision that was made. Jim allowed it to be a player-friendly environment.”

However, in an interview conducted an hour later with the New York Times, Reed said at that point he was looking at Spieth “like I was about to light the room up like Phil in ’14,” a reference to Phil Mickelson’s searing criticism of captain Tom Watson – sat just a few feet away – following the loss at Gleneagles.

That defeat prompted the formation of a “Task Force” to examine the reasons behind recent US failures in the Ryder Cup and seemed to pay dividends with the victory at Hazeltine, but it did not take long for the cracks to appear after the failure to win on European soil for the first time since 1993.

“The issue’s obviously with Jordan not wanting to play with me,” Reed said. “I don’t have any issue with Jordan. When it comes right down to it, I don’t care if I like the person I’m paired with or if the person likes me as long as it works and it sets up the team for success.

Reed and Woods were the only American pair to lose on Friday morning, after which Reed expected Furyk to revert to pairings which had worked previously. Instead, he and Woods sat out the foursomes session which was lost 4-0 for the first time in Ryder Cup history.

After a second defeat to Francesco Molinari and Tommy Fleetwood on Saturday morning, Reed was left out again while Woods partnered Bryson DeChambeau to another loss to Molinari and Fleetwood.

“For somebody as successful in the Ryder Cup as I am, I don’t think it’s smart to sit me twice,” added Reed, who beat Tyrrell Hatton in Sunday’s singles.

“Every day (in the team room) I saw ‘Leave your egos at the door’. They (the Europeans) do that better than us.”