Eddie Pepperell asks Prince Harry to be his caddie

New PING player Eddie Pepperell was at it again on Twitter, asking Prince Harry if he'd like to be his caddie. 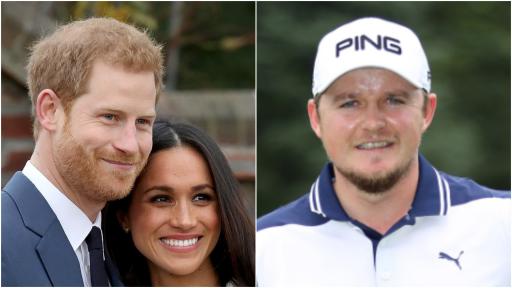 When it comes to golfers on Twitter, there's no better man to follow than Eddie Pepperell (sorry Max Homa). The Englishman is a true comedian and constantly comes out with genius tweets, whether they're to do with golf or not. Pepperell has recently struck again and this time his target was Prince Harry.

It was recently reported that Prince Harry and Meghan Markle want to step back as senior royals and become financially independent, splitting their time between Britain and North America.

RELATED: Did you know Rory McIlroy once dated Meghan Markle?

The news didn't go down too well within the monarchy, but it has certainly split opinion on social media, with many people believing that the recently married couple should live their life how they please.

Pepperell took full advantage of the news and took to Twitter to make Prince Harry an informal offer...

Dear Prince Harry, you seem like a nice lad. So, now you’re going to be facing the world as a person of ginger, you’re gonna need some help. Therefore, if you’d like to caddie for me I’d be more than happy to offer you a job and put Mick (another ginger) out of work. Let me know.

PING recently announced the signing of the Twitter King, although I'm sure they signed him for his talents in golf, not social media.

Pepperell is a two-time European Tour winner, having claimed victories at the Qatar Masters and British Masters in 2018, while also finishing T6 at the Open Championship in the same year. Last season, he finished T3 at The Players Championship at TPC Sawgrass.

He will make his debut as a PING staff player at the South African Open at Randpark Golf Club in Johannesburg this week.

NEXT PAGE: Did you know you could be DQ'd for breaking any of these THREE rules?