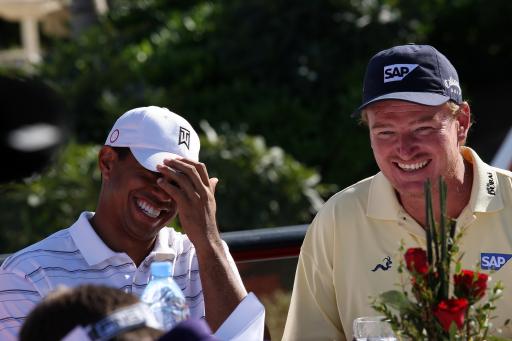 "Tiger Woods dominated a bad era of golf." Those were the words bashed into a keyboard by Fox Sports Radio's Jason Smith just 48 hours after the 14-time major champion finished runner-up to Brooks Koepka at the US PGA.

Yes, an era that included the likes of Vijay Singh, Ernie Els and Phil Mickelson, a trio with 96 PGA Tour titles between them.

He didn't stop there.

"The best players were all old and at the very end of their careers."

They were hardly finished... Els and Mickelson aren't even eligible for the Champions Tour yet.

There was still more.

"Tiger NEVER had a guy like Brooks Koepka back then." Has this guy only been watching golf the past 14 months or something?

Yes, Brooks is a huge talent and no doubt on his way into the Hall of Fame one day, but he's only won four times on Tour at the age of 28. Let's just calm down for a moment.

"Tiger dominated a BAD era of golf. The best players were all old and at the very end of their careers. Tiger NEVER had a guy like Brooks Koepka back then."

Social media went into meltdown Here's a look at some of the best tweets...

LOL what a take. https://t.co/gmQuuTGpU0

He had a 67.79 scoring average (lowest ever) in TWO separate seasons. He also made 142 consecutive cuts and had several years hitting 80%+ of his greens. Those numbers (which have nothing to do with the level of competition) would comfortably dominate this era

Please. Resign. Today. And When Koepka does this for a decade, we’ll talk.

Did Skip Bayless write this tweet? Ice cold take. Phil Mickelson was there the entire time with Tiger. Ernie Els?

Say what???? Ernie els would be Jack Nicklaus without Tiger.

This is an extremely poor take. Take a look at the scoring average of the folks he was beating versus those winning now, it’s not far off and he was lapping fields

Tiger in his prime against these guys has the exact same records. You being ridiculous. Koepka has 4 career wins at 28. Tiger had multiple Masters wins and 20 plus wins by then. Don’t be a prisoner of the moment.