Gareth Bale has got on the wrong side of the Real Madrid fans once again, this time for his cameo in a new BT advert. 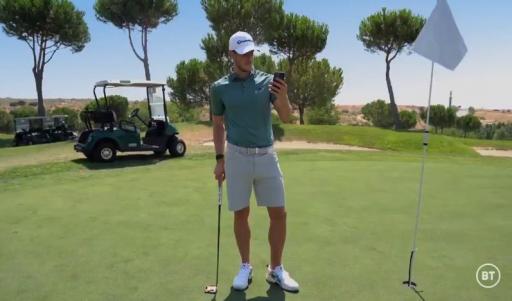 Gareth Bale has once again got on the wrong side of the Real Madrid fans after he seemed to troll the Spanish giants during a new television advert for BT Sport.

It's no secret that Bale isn't exactly adored by the fans of Real Madrid, nor is he part of boss Zinedine Zidane's plans at the club, hence why the Welshman seems to enjoy spending most of his time on the golf course.

Bale had previously upset Madrid fans when he posed with a poster that said 'Wales. Golf. Madrid. In that order.' and basically admitted that he would rather play golf than play for the Spanish club.

You'll often see Bale striking golf poses during pictures with his team mates and unless Real Madrid offload the 31-year-old, you can guarantee that he will continue to wind up the fans whenever he can, something that he seems to have managed in a recent BT Sports TV advert.

The video featured a number of football stars all reacting to the fake news that there would be an 'unlimited substitutions' rule applied to all leagues for the upcoming season.

Alexander-Arnold then video calls Bale who is on the golf course dressed head-to-toe in golf gear and the Scouse defender jokes: "You might actually get a game now."

Now most players would react well to the thought of getting more game time, but Bale throws his phone on the floor and walks away. Watch the advert for yourself in the video below:

Bale has been linked with a move back to England for a long time and most recently it has been suggested that the Welsh wizard could be on his way to Manchester, after talks between Manchester United and Jadon Sancho seem to have hit a wall.

If Bale can't find a move away from Real Madrid, he has made it clear that he will continue to play golf or sit on the bench for another two years until his £18 million-a-year contract expires.

NEXT PAGE: Little kid attempts John Daly drive and ends up on the floor!