Golf Betting Tips: Our BEST BETS for the 2021 Solheim Cup

After a dramatic victory in 2019, Catriona Matthew will be hoping that her European side can upset the odds again in the Solheim Cup. 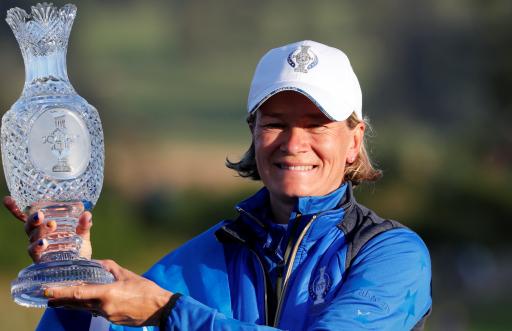 The Solheim Cup returns to American soil this week at the Inverness Club in Toledo, Ohio and it is always a week that golf fans cannot wait for.

Pat Hurst's American side are the favourites to grab the cup back out of European hands, but Catriona Matthew's team has a good mix of experience and fresh faces in 2021.

Team USA has four players ranked in the top 15 of the Rolex Rankings with major champion and Olympic gold medallist Nelly Korda at the top of the pile.

Lizette Salas and Lexi Thompson have both made four appearances at the Solheim Cup, while Mina Harigae, Jennifer Kupcho and Yealimi Noh will be making their debuts.

Team Europe are also playing with three rookies this time around, but they are bolstered with the experience of Charley Hull, Anna Nordqvist and Carlota Ciganda.

We have two betting selections for you to get your teeth into:

Danielle Kang has a decent record at the Solheim Cup. She has won four matches and lost four matches, but now she finds herself on home soil for the first time since 2017 with much more experience.

She has won five times on the LPGA Tour and is currently ranked eighth in the Rolex Rankings. The 28-year-old has settled in as a Solheim Cup regular now in what will be her third appearance and I think she offers great value to be the top scorer for the US side.

Celine Boutier won all four of her matches at the 2019 Solheim Cup at Gleneagles, forming a fantastic partnership with Georgia Hall, who is also part of the team this week.

Boutier has finished in the top-10 in four of her last seven LPGA Tour appearances, so the 27-year-old is in good form ahead of an event which she clearly thrives at.