A golf club has allowed its members to remove the flag from the hole by placing hand sanitiser stations next to every green. 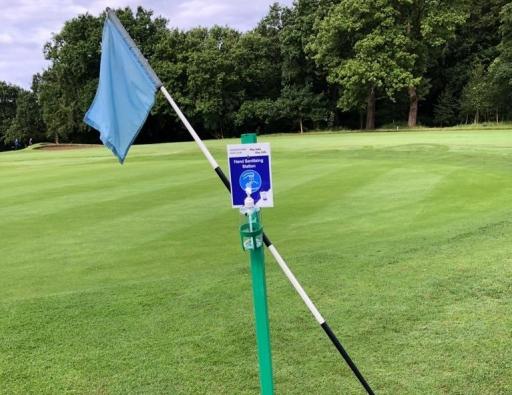 The rules of golf have been altered due to the current coronavirus pandemic and one that we've all had to get used to is putting with the flag in, but that rule just changed for a golf club in Lancashire.

To limit the spread of COVID-19 on golf courses, it was made a ruling at golf clubs around the country that all players must leave the flag in the hole at all times.

Some golf courses filled the holes to make them less deep and therefore make picking your ball out much easier, while others used tools that allowed you to remove your ball by lifting an attachment with your putter.

Haydock Park Golf Club on the other hand wanted its members to have the freedom of removing the flag for the Captain's Weekend, one of the club's flagship events.

Of course the Lancashire golf club didn't want to put anyone at risk, so installed hand sanitiser stations next to every green, along with a hook to rest the flag against whilst players are on the green.

“One of the committee members asked about the potential to have the flagsticks removed in time for the weekend,” explained Stephen Nicholson, business manager of Haydock Park Golf Club.

“We maintained that if we could do this in a safe and practical way then we’d consider. After contact with England Golf, it was deemed that we could indeed look to progress with a policy that enabled flagstick removal so long as the risk was covered and mitigated as much as practicably possible.

“The committee signed off a move to create sanitiser stations next to each green, with a hook to allow the flagstick to be rested on whilst players took their shots and then replaced the flagstick after they had finished.

“We recommend that each group designate one member of the group to remove the flag if they feel this is appropriate and they should do so with a gloved hand. There is a bottle of hand sanitiser affixed to each station so players can cleanse their hands both prior to and after dealing with the flagstick.”

The stations went down very well with members and players were pleased to be able to remove the flags during putts. The club confirmed that due to the success of the stations, they will be used for future events.

“With restrictions easing and the guidance relying very much on a common sensical approach, we decided that because the event a couple of weeks ago went so well we’d incorporate this into our daily course setup and give the player the opportunity to remove the flagstick if they so wish,” he added.

“However, those that continue to be wary during this time can still putt with the flagstick in and use the golf ball hole lifters as they have been doing.

“The creation and installation of these stations came at zero cost to the club as one of the committee members kindly sourced all products, created and installed them for us.

“It’s exactly this kind of support that all golf clubs need from their members during this time and we have many volunteers and committee members that have given so much to the cause these last few months. They’re invaluable to the running of our club and we couldn’t do so without them.”