Is this golf ball considered embedded for free relief? Have your say here... 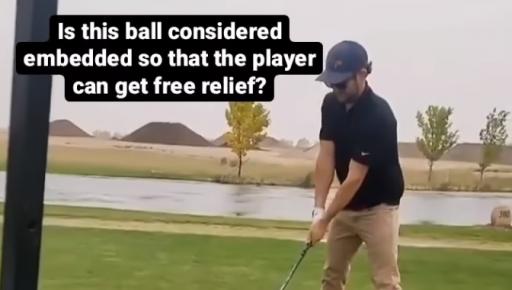 Golf fans have been debating whether or not a player is entitled to free relief for an embedded ball in the following video posted on Instagram by the popular Golf Rules Questions account.

In the video below, a golfer makes a complete hash of his tee shot and the ball plunges straight into the turf.

GRQ poses the question: "Is this ball considered embedded so that the player can get free relief?"

The answer, according to GRQ: "No, the ball was never airborne."

So the result is a penalty drop as the ball is now unplayable.

WATCH THE VIDEO BELOW AND THEN SCROLL DOWN TO LEARN MORE ABOUT THE RULING - ALONG WITH SOME OF THE COMMENTS OF GOLFERS WHO DISAGREE WITH SUCH A RULE:

GRQ adds: "No this ball is not considered embedded. It's not under the definition of embedded because the ball was never airborne. Rule 16.3a(2)."

Taking a closer look at the particular rule in question over on the R&A Rules Website, and here is the definition of Rule 16.3a(2)

Determining Whether Ball Is Embedded. A player’s ball is embedded only if:

A ball is not embedded if it is below the level of the ground as a result of anything other than the player’s previous stroke, such as when:

Here's how a number of golfers reacted to the ruling:

"The ball was technically airborne though. What qualifies something to be airborne?" commented one golfer.

GRQ replied: "Getting off the ground."

Another posted: "Penalty drop if it's unplayable?"

One golfer wrote: "There is way too much grey area to say it wasn't airborne as it left the club, to outright call it a penalty and not plugged 'after being airborne'.  Free drop and move on. Golf rules are so stupid sometimes."

GRQ responded: "So you think at some point in time this ball was completely surrounded by air only?"

"I strongly disagree with this rule," commented another golfer.

One golfer said: "Some rules makes absolute no sense to me."

"Embedded balls should be free relief no matter whether it's airborne or not," suggested one golfer.

"Yet another rule that needs another look at," claimed another.

Head over to the GRQ post now and get involved with the debate to give your own opinion on the ruling.

Next Page: Did you know this rule about teeing up ahead of the tee markers?!